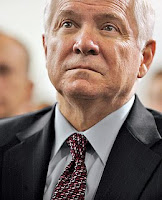 Today Secretary of Defense Robert Gates said Congress should hurry up and repeal DADT before the new members arrive in January. But it doesn't sound like he thinks they will.

"I would like to see the repeal of "don't ask, don't tell" but I'm not sure what the prospects for that are," Gates said Saturday, as he traveled to defense and diplomatic meetings in Australia. Unless the lame-duck Congress acts, the repeal effort is considered dead for now. The current, Democratic-controlled Congress has not acted to lift the ban, which President Barack Obama promised to eliminate. In his postelection news conference Wednesday, Obama said there would be time to repeal the ban in December or early January, after the military completes a study of the effects of repeal on the front lines and at home.