Via JMG: NOM Fires Back At HRC 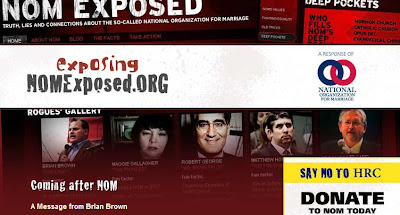 Sometimes you just have to have a good belly laugh. Don't get me wrong—the work we are doing is serious and important. But when the largest same-sex marriage group in the nation, with its annual budget of $40 million, decides to launch a new website to "expose" NOM and the work we are doing together, I have to wonder what they were thinking. Seriously. Go visit the site for yourself: NOMExposed.org.

When I first went to the site, I half-expected Vincent Price's voice to start streaming from the site at any moment because it looked like a fan-site for the "Thriller" video. It is seriously the most over-the-top, ghoulishly designed, hilariously campy website I have ever seen. Ever. While the site itself is a joke, the reasons behind it are not: Intimidation, bullying & religious bigotry. But we will not be silenced. Will you stand with us to protect marriage and religious liberty?

Posted by oreydc at 4:00 PM No comments:

Via Teaching Tolerance: 'It Gets Better' Can Help LGBT Kids Survive

Submitted by Sean McCollum on September 29, 2010
Billy Lucas grew up an Indiana farm boy in Greensburg—halfway between Indianapolis and Cincinnati, Ohio. He grew up winning blue ribbons for his prized and much loved horses and lambs. He also grew up enduring taunts, threats, and physical abuse from bullies. He grew up with those bullies telling him he should kill himself because they thought he was gay. Whether he was or not, Billy never said.

In early September, Billy Lucas stopped growing up. He tied a horse’s lead around his neck and hanged himself in the barn. He was 15. Reports from friends and fellow students described a pattern of harassment at Greensburg High that had been escalating. The day he died, Billy had been suspended for lashing out verbally at those who were tormenting him. Administrators claimed ignorance of any problems. Sadly similar stories have been cropping up in the media lately.

News like this especially grieves members of the adult LGBT community, many of whom remember their own trauma and tribulations running the gauntlet of high school hallways. Studies repeatedly show that gay and questioning teens are much more likely to attempt suicide than their straight peers, especially if they come from families who strongly disapprove of homosexuality. While many progressive communities have had the guts to battle homophobia in their schools, that awareness rarely extends beyond the ring of a city’s suburbs.
How to reach LGBT youth as well as others perceived as “different” trapped in insulated communities? Dan Savage, the Seattle-based advice columnist and LGBT activist, is going straight to the besieged kids themselves via the Internet.

In response to Billy Lucas’s death, Savage has created the “It Gets Better Project.” “I realized that with things like YouTube and social media, we can talk directly to these kids,” Savage told The New York Times. “We can make an end run around the schools that don’t protect them, from parents who want to keep gay kids isolated and churches that tell them they are sinful or disordered.”

The “It Gets Better” website features video clips of LGBT adults sharing their own high school horror stories, while telling kids to stay alive because brighter days are coming. So far, there have been 131 videos posted and more than 300,000 views. “Honestly, things got better they day I left high school,” says Terry Miller at one point. Miller is Savage’s long-time partner, and together they have a 13-year-old son.

The testimonials do not downplay the bigotry and abuse the LGBT teen audience may be facing. But the Web channel’s overall message is one of hope and “don’t give up.” Some clips include the occasional four-letter words, but nothing kids don’t hear 100 times a day at school. Teachers and Gay-Straight Alliance coordinators should always keep this valuable resource in mind.

“If my adult self could talk to my 14-year-old self and tell him anything … I’d tell him there really is a place for us, a place for you,” Savage says to the camera, quoting a lyric from West Side Story. “You will have friends who love and support you. You will find love … and community.”

For LGBT youth, that message can be the difference between giving up and growing up.

McCollum is a Teaching Tolerance blogger and children’s author living near Boulder, Colo.

Posted by oreydc at 3:57 PM No comments:

AJ Mclean "IT GETS BETTER"

Posted by oreydc at 2:18 PM No comments: 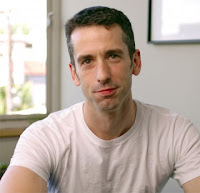 "The religious right points to the suicide rate among gay teenagers — which the religious right works so hard to drive up as evidence that the gay lifestyle is destructive. It's like intentionally running someone down with your car and then claiming that it isn't safe to walk the streets.

"Which is why I argued that every gay teen suicide is a victory for the religious right. Because, you see, your side does use those suicides to 'perpetuate [your] agenda.' Tony Perkins and all those other oddly effete defenders of 'Christian values' and 'traditional marriage' will point to this recent spate of gay teen suicides to argue against gay marriage, anti-bullying programs, against allowing gay people to serve in the military—basically, they'll gleefully use these tragedies to justify what they like to call the 'Christian, pro-family agenda.'" - Dan Savage, responding to a woman who wrote to say that her feelings were hurt by his claim that Christians are responsible for gay teen suicides.