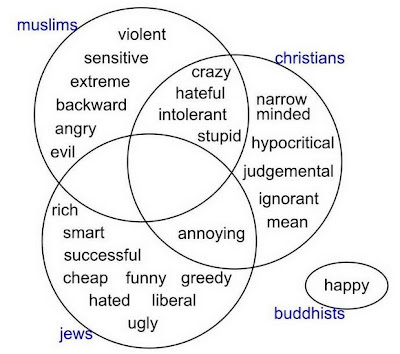 When you begin a Google search with the question "Why are [Christians, Jews, Muslims] so" - you get the above suggestions. The same query regarding Buddhists yields only "happy."

UPDATE: It's not listed in the above-linked story, but I've done the same query on atheists. 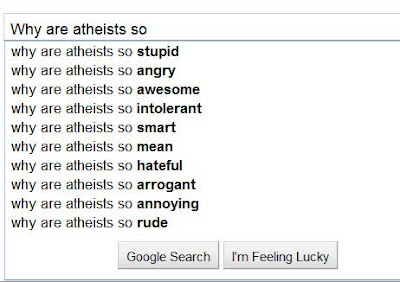 Labels: Buddhism, Google, religion
reposted from Joe
Posted by oreydc at 7:25 PM No comments: Links to this post

Via JMG: Andrew Sullivan On Homocons And GOProud: They Are Nauseating 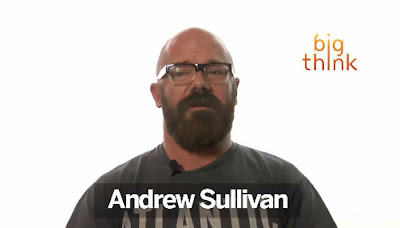 In a video essay posted today on Big Think, Andrew Sullivan muses "How Can Anyone Be Gay And Republican?" Here's an excerpt.

You know, I used to say, we have to stay in these parties because certainly gay people do not want to become a Democratic Party constituency that is totally taken for granted, which is, of course, what has happened. When you have no leverage over the party, they don’t do anything for you—except take your money and invite you to cocktail parties, which is all that’s happened really in two years under Obama with two houses of Congress.

But at the same time, you know, this Homocon thing... it was in someone’s apartment. I mean the idea that this has been any genuine meaning out there for most people, there are plenty of gay people; many, many, many more I think than other minority groups actually, who would love a party of limited small government, prudent, strong foreign policy, balanced budgets, live and let live, like the British Tories. And if the Republican Party ever becomes that again, I think there will be plenty of places for gay people in it.

But to do so and join a party on condition that we oppose our own civil rights and our own basic civil equality seems a non-starter for me. I mean, it’s... there’s something quite nauseating about it actually. And you see even, like, Chris Barron who is the head of Homocon, or whatever they are calling themselves, GOProud, having to say that when Jim DeMint goes on and says that no gay person should be a school teacher, which is to the—which Ronald Reagan rejected in 1978—where are you left?

Via JMG: Quote Of The Day - Ted Olson 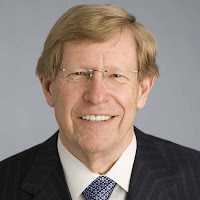 "It happens every once in awhile at the federal level when the solicitor general, on behalf of the U.S., will confess error or decline to defend a law. I don't know what is going through the [Obama] administration's thought process on 'don't ask, don't tell.' It would be appropriate for them to say 'the law has been deemed unconstitutional, we are not going to seek further review of that.'" - Former Bush administration Solicitor General Ted Olson.
Labels: DADT, Obama administration, Quote Of The Day, Ted Olson
reposted from Joe
Posted by oreydc at 7:13 PM No comments: Links to this post


In response to the murky legal waters currently swirling around DADT, the Pentagon has announced it is raising the rank of persons able to make the call to eject a gay or lesbian servicemember. Chris Geidner reports at Metro Weekly:

Discharges under the military's ''Don't Ask, Don't Tell'' policy will now take the approval of the service branch secretary, and only in consultation with the defense department general counsel and the undersecretary of defense for personnel and readiness, according to a pair of memoranda issued by senior military leadership today.

Until further notice, pursuant to a memorandum from Defense Secretary Robert Gates and a follow-up memorandum from Undersecretary of Defense for Personnel and Readiness Clifford Stanley, no service member can be discharged under DADT without the ''personal approval of the secretary of the military department concerned, and only in coordination with me and the General Counsel of the Department of Defense.''

The message I'm seeing is that the Pentagon intends to make it extremely hard to kick someone out.
Labels: DADT, DOD, military, Pentagon
reposted from Joe
Posted by oreydc at 7:04 PM No comments: Links to this post

Posted by oreydc at 2:57 AM No comments: Links to this post

Posted by oreydc at 2:50 AM No comments: Links to this post