I so gotta have this book

Quote of the Day

Armistead Maupin ‎"She preferred the kind of (Facebook) Friends who just talked about the weather, or showed off their vacation snaps of Fiji, or wondered aloud whether to eat that bar of 70% dark chocolate right now. There was a terse, sewing-circle flavor to this discourse, a genial brevity, that she found appealing." -- MARY ANN IN AUTUMN

Posted by oreydc at 10:43 PM No comments: Links to this post

Via JMG: Will Ireland Elect A Gay President? 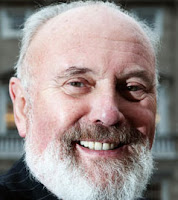 Openly gay Sen. David Norris decided to run for president of Ireland after supporters launched a Facebook campaign urging him to enter the race. And now polls show him far ahead.

Although, like the British monarchy's, the Irish president's power is more symbolic than real, elections to the post have previously been used to protest against the Republic's political establishment. Norris is non-aligned, and is hoping to tap into the widespread discontent over the profligacy of the Celtic tiger years and the way the state's main party, Fianna Fáil, handled the economy. Norris denies his sexuality will be an issue even in more conservative rural parts of Ireland. "It's a non-issue," he says. "It's a non-issue with the people of Ireland. Some may have some concerns, and I hope I am able to address them. I have just had a major radio interview in Dublin and the interviewer asked me about it, and people came on the programme to say 'Will you get out of that? What does it matter! We want someone with vision ... someone who is independent.'

Norris says he has lived a "decent and respectable life" and that those seeking to embarrass him for his sexuality "will find no scandal."
Labels: Ireland, LGBT History
reposted from Joe
Posted by oreydc at 9:47 PM No comments: Links to this post

Via JMG: That's Gay Salutes the "The A-List"

Posted by oreydc at 9:02 PM No comments: Links to this post

The Weather is a Dick

Posted by oreydc at 9:00 PM No comments: Links to this post

Posted by oreydc at 8:49 PM No comments: Links to this post