Posted by oreydc at 9:07 PM No comments: Links to this post

Via JMG: It Gets Better: DNC Staff

Posted by oreydc at 9:27 AM No comments: Links to this post

I have totally lost all respect for Evangelicals...

Via JMG: Tony Perkins: Gay Kids Kill Themselves Because They Know They're Abnormal 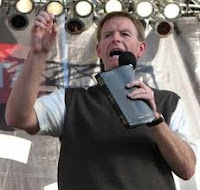 Tony Perkins appeared on NPR today to declare that the rate of suicides among LGBT youths is so high because those kids know they are freaks. And not because they're taught every day of their hopeless lives that God hates them. Via Right Wing Watch:


Tony Perkins, president of the evangelical Family Research Council, says gay activists are exploiting the concern over bullying — and twisting the facts. "There's no correlation between inacceptance of homosexuality and depression and suicide," he says. Rather, Perkins says, there is another factor that leads kids to kill themselves. "These young people who identify as gay or lesbian, we know from the social science that they have a higher propensity to depression or suicide because of that internal conflict." Homosexuality is "abnormal," he says, and kids know it, which leads them to despair.

Joe goes on to say: "Repulsive and typically full of Christianist love. But what the FUCK was NPR doing hosting Tony Perkins? Do they bring on the KKK to discuss affirmative action? Would they give airtime to Faisal Shahzad to provide an opposing view on the political value of car bombs? Tony Perkins and the Family Research Council are spending millions of dollars every fucking month to enable the murders and suicides of LGBT Americans. What about that is unclear to NPR?"