Folks, not voting Dem because you're angry about LGBT rights is like burning down your house because you don't like the carpet. We can and will eventually change that shitty carpet, but we need the HOUSE it goes in. 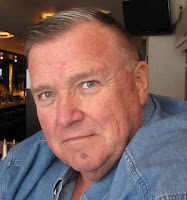 "No one has been more gravely disappointed and, at times livid, with the practically non-existent record of President Obama on LGBT equal rights. Over and over again I have held this administration's feet to the fire in an effort to force them to move forward in our struggle for freedom. As we all know by now, those pleas often have fallen on deaf ears. Our disappointment, anger and frustration is totally justified. What is not justified is to allow those emotions to intrude on our ability to be intelligent voters this election day. We cannot and should not shoot ourselves in the collective foot because of the administration's actions.

"Why is it important to vote? Let's get right down to it: If the House and Senate fall into Republican Tea Party hands on November 2nd, the LGBT community will be facing the most hostile United States Congress in our history. The election of these bonafide Teabagging wing-nuts could cause chaos, fear and intimidation in our political process. Their ascendancy to power would validate some truly dark and despicable forces operating in American politics. If we think it is hard to achieve equal rights now just try and do it in a Tea Party dominated Congress." - David Mixner, writing on his personal blog. That's just the first two paragraphs, hit the link and read the rest.
Labels: 2010 elections, David Mixner, Democrats, Obama administration, teabaggers
reposted from Joe
Posted by oreydc at 12:11 PM No comments: 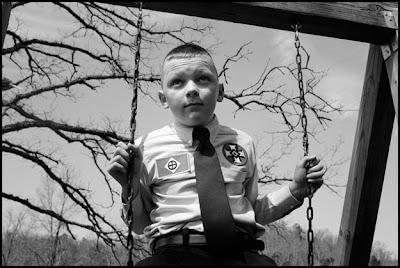 A coalition of the nation's leading anti-gay Christian activists have issued a joint statement denouncing any attempt to teach Christian children that it's wrong to beat gay kids.

2. Jesus described marriage as the union of one man and one woman, and that humans were created male and female "from the beginning." Gender change is a defiant and ungrateful sin against God's direction and design (Matthew 19:4-6)

3. Violence against children is wrong. Jesus was very clear in his protection of children and also had harsh words for those who would forbid children from knowing His truth and love ( Luke 17:2; Luke 18: 15-16). "Gay" activists want to keep children from knowing, loving and following the real Jesus Christ. At the very least, schools must not interfere in the desires of parents to raise their own children to follow Christ and live out biblical morality.

4. School boards aid child corruption and insult faithful families when they allow "gay-straight alliances," homosexual indoctrination programs, permission for use of opposite sex restrooms, and any of the other ridiculous demands of the "gay" lobby.

And who are the signers of the statement? All your old favorites.

Via JMG: Tweets Of The Day - NOM 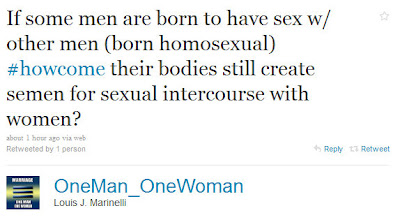 Via JMG: Sharron Angle: The Wicked Ways Of Gay Marriage & Medicare Are Destroying Us

Speaking to a Nevada church, Sharron Angle got all caught up in Jeebus and denounced social programs, abortion, divorce, and gay marriage as the "wicked ways" that are destroying America.

According to Angle, "the people" should help their needy, not the government.
Labels: 2010 elections, bigotry, Jeebus, Nevada, religion, Sharron Angle
reposted from Joe
Posted by oreydc at 11:59 AM No comments:

“Be the change you want to see in the world.”
--Mahatma Gandhi

Facebook Quote of the Day (via Tim Van Den Bos):

They can out spend your candidate. They can drag you down and stomp on your head because you are carrying a sign they don't like. They can even try to ruin your life because you can't be bought. What they can't do is take away your convictions, your soul, or your vote.