Via JMG: Quote Of The Day - Oliver North 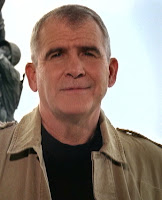 "Adolf Hitler, Benito Mussolini and Hideki Tojo tried and failed. Mao Zedong, Nikita Khrushchev and Ho Chi Minh couldn't do it. But commander in chief Barack Obama may well succeed where others could not. If he has his way, he will demolish the finest force for good in the history of mankind — the U.S. armed forces. And he wants to make it all happen before the end of the year.

"Nearly 25 percent of those now serving — and as many as 32 percent of Marines — said they are likely to leave the service rather than be assigned to live with and serve beside active homosexuals. This potential attrition — while more than 150,000 troops are serving in harm's way — hasn't diminished the O-Team's zeal for repeal. When Sen. John McCain confronted Mullen with this consequence from allowing homosexuals into the military, the admiral replied, 'We'll deal with that.' Gates, ever sympathetic to the needs of our troops, observed, 'They can't just up and leave.'

"No, they can't. But when they come home, they can vote with their feet. Is wrecking the world's finest military the price we have to pay for a campaign promise?" - Accused drug trafficker Oliver North.
Labels: assholism, DADT, Oliver North, Quote Of The Day
reposted from Joe
Posted by oreydc at 1:10 PM No comments:

Director, Palm Center, University of California
Back when Senator John McCain was a straight talker, he said that if military leadership ever told him that repealing "don't ask, don't tell" would be in the best interest of the forces, then he would change his views on the matter. That was then and this is now. McCain has joined in lockstep with his Republican colleagues. Republicans are now revealing that they don't care what's good for the military, or about known facts regarding don't ask, don't tell and its effect on military cohesion and performance. They cares about one thing and one thing only: prejudice. And when it comes to prejudice, all they want is more.

Posted by oreydc at 1:26 AM No comments:

Upon the governor’s signature, Illinois will become the second state that is currently offering civil unions to same-sex couples. The status of the various recognition mechanisms is as follows:

Marriage on the same terms as heterosexual marriage – 5.1% of US Population:
Massachusetts
Connecticut
Iowa
Vermont
New Hampshire
District of Columbia