Via Senator Boxer: Now is the Time to Repeal “Don’t Ask, Don’t Tell”

In 2003, Air Force Major Margaret Witt, a decorated flight nurse, saved the life of a critically ill Defense Department civilian who collapsed during a commercial aircraft flight coming home from Seeb Air Base in Oman.

For her actions, Major Witt received the Air Force Commendation Medal.  But, shockingly, she was later discharged from the Air Force because of the ill-advised “don’t ask, don’t tell” policy.  After a lengthy court battle, Major Witt last week learned that she will be able to rejoin our military.

“The men and women in the unit are like family members to me,” she said, “and I’ve been waiting a long time to rejoin them.”  Major Witt and thousands of other brave service members have been waiting far too long.

According to a recent CNN poll, 78 percent of the American people think we should allow gays and lesbians to serve openly in our armed forces. The vast majority of our brave men and women in uniform believe this change will not hurt our military's effectiveness. When they were asked as part of the Pentagon's just-released review of "don't ask, don't tell," 70 percent of our service members said repealing this discriminatory policy would be positive, mixed or have no impact on their ability to do their jobs.

They understand that we cannot keep expelling stellar service men and women from the military for reasons that have nothing to do with their ability to protect our nation. It harms our national security.

We know that U.S. service men and women are already fighting in Afghanistan alongside gays and lesbians who serve openly in the armed forces of our allies, such as Australia and the United Kingdom.

Not only does "don't ask, don't tell" hurt our military, it costs our nation.

At a time when our nation is confronting record deficits, American taxpayers have been forced to pay up to a half a billion dollars to replace the 13,000 service men and women discharged under this policy.

"Don't ask, don't tell" simply does not reflect who we are as Americans - which is why I have opposed the policy since it was proposed back in the 1990s. The strength of our military, just like the strength of our nation, is grounded in a fundamental belief that all people are created equal and deserve the same rights and opportunities. Denying someone the opportunity to serve our country because of who he or she may love runs counter to our values.

President Obama has said that he wants to repeal "don't ask, don't tell." The courts are increasingly striking down parts of the law. The House of Representatives has passed legislation to repeal it. And the Pentagon has extensively prepared to implement this change. As Admiral Michael Mullen, the chairman of the Joint Chiefs of Staff, has said, repealing "don't ask, don't tell" is simply "the right thing to do." All that remains is for the Senate to act. 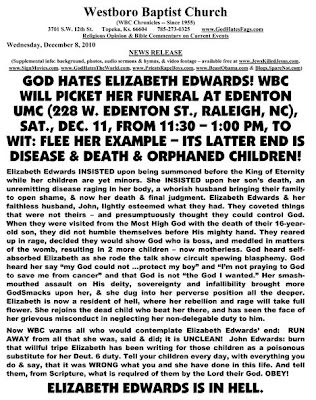 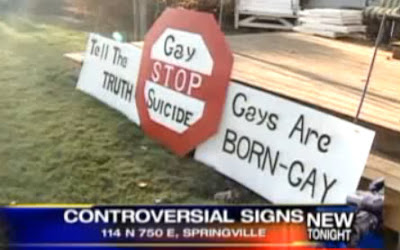 Administrators and parents at a Utah elementary school are upset because a man who lives adjacent to the school has posted the above signs.

Leonard Ridley lives next to Art City Elementary in Springville. He recently posted three signs on his fence, facing the playground after he read news about the recent rash of gay suicides. "The signs of course say stop gay suicide, tell the truth, gays are born gay," Ridley said. "I realized at that point that I was in an enviable location in back of the school and this would be an opportunity to provide information to the children tat would be carried to the adults in their lives, to the teachers, to their parents in particular and carry information concerning homosexuals and homosexuality that would perhaps contradict with the mistaken ideas that they already had."

Saying that many parents had complained, school officials said that suicide was an inappropriate subject for elementary school students. The city has declared that the size of the signs exceed zoning codes and Ridley has agreed to post only one sign at a time. 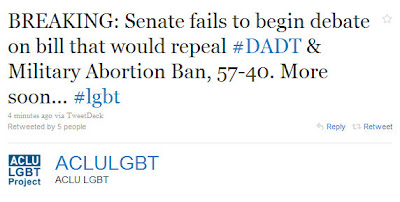 I have to be honest -- I just vomited a little in my mouth. The Senate just voted on whether to bring the National Defense Authorization Act (NDAA) up for conversation. Not for passage -- just for conversation. It failed. We all laid everything we could on the line for this bill -- a piece of legislation that would have repealed "Don't Ask, Don't Tell." We all know that gay and lesbian Americans are just as patriotic and capable as straight Americans -- but dysfunctional Senate processes, a homophobic Republican Party, and a spineless Democratic Party got in the way of equality once again.

"The Senate’s apparent refusal to act on ‘Don’t Ask, Don’t Tell’ repeal makes Presidential action imperative in order for him to fulfill his state of the union promise,” said HRC President Joe Solmonese. “The only measure of success is an end to the discharges and anything less is unacceptable.” Under his powers to ensure national security following the September 11 attacks, the President has the ability to issue stop-loss orders preventing certain service members from discharge. Pending an enduring solution to this unjust and discriminatory law, the President can and should suspend DADT-related discharges under the stop-loss provision. “In this time of war, we cannot sustain a policy that has already deprived our military of thousands of service members, many with critical skills in fighting terrorism,” said Solmonese.

Today’s vote is heartbreaking and demoralizing to all members of OutServe - and the tens of thousands of gay, lesbian, and bisexual service members - who must continue to serve in silence and live a lie. No words can describe how it felt to watch our U.S. senators uphold discrimination and perpetuate the deceit and compromised integrity that consistently result under "Don't Ask, Don't Tell." We had more faith in our elected officials to heed the advice of military leadership and vote against prejudice. Instead, a minority of senators have successfully blockaded the entire defense spending bill on the basis of prejudice and politics.

"This was a major failure on the part of the Senate to simply do its job and pass an annual defense authorization bill. Politics prevailed over responsibility today, and now more than one million American servicemembers, including tens of thousands of gay and lesbian troops, are worse off as a result," said Alexander Nicholson, Executive Director of Servicemembers United and a former U.S. Army interrogator who was discharged under "Don't Ask, Don't Tell." "Since the votes are there in isolation, the Senate should still consider a stand-alone bill to repeal the 'Don't Ask, Don't Tell' law before adjourning for the winter holidays."