Posted by oreydc at 7:32 PM No comments: Links to this post 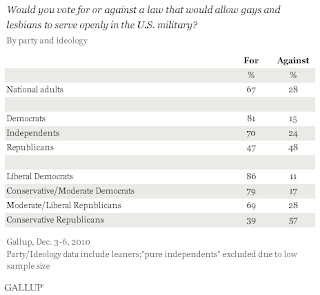 http://buckmire.blogspot.com/2010/12/gallup-poll-shows-overwhelming-support.html
Posted by oreydc at 6:58 PM No comments: Links to this post

Via Truthout: William Rivers Pitt | Back to Basics

William Rivers Pitt, Truthout: "The 'Don't Ask Don't Tell' repeal has fallen to dust. The DREAM Act has collapsed. The president is speaking perfect Republican with his talk of simplifying the tax code, freezing federal wages, and best of all, his feral attacks on his own supporters for having the gall to try and hold him to his word. Mr. Obama lavishes praise and apologies all over his opponents, even as they try to annihilate him, while attacking viciously the people who wore out shoe leather and gave money they couldn't afford to give in order to see him into the office he has thus far not graced at all."

Posted by oreydc at 6:52 PM No comments: Links to this post


Over at Good As You, activist Jeremy Hooper has somehow uncovered a not-yet issued press release from the Family Research Council in which they call for the nation's anti-gay hate groups to stand in solidarity against the Southern Poverty Law Center's designations of anti-gay hate groups.

In today's second death-of-irony alert, the document is titled Start Debating: Stop Hating. Because according to the Family Research Council, we are the haters in this game.

The surest sign one is losing a debate is to resort to character assassination. The Southern Poverty Law Center, a liberal fundraising machine whose tactics have been condemned by observers across the political spectrum, is doing just that.

The group, which was once known for combating racial bigotry, is now attacking several groups that uphold Judeo-Christian moral views, including marriage as the union of a man and a woman. How does the SPLC attack? By labeling its opponents “hate groups.” No discussion. No consideration of the issues. No engagement. No debate

These type of slanderous tactics have been used against voters who signed petitions and voted for marriage amendments in all thirty states that have considered them, as well as against the millions of Americans who identify with the Tea Party movement. Some on the Left have even impugned the Manhattan Declaration-which upholds the sanctity of life, the value of traditional marriage and the fundamental right of religious freedom-as an anti-gay document and have forced its removal from general communications networks.

This is intolerance pure and simple. Elements of the radical Left are trying to shut down informed discussion of policy issues that are being considered by Congress, legislatures, and the courts. Tell the radical Left it is time to stop spreading hateful rhetoric attacking individuals and organizations merely for expressing ideas with which they disagree. Our debates can and must remain civil - but they must never be suppressed through personal assaults that aim only to malign an opponents character.

You can take action by adding your name to the following statement:

We, the undersigned, stand in solidarity with Family Research Council, American Family Association, Concerned Women of America, National Organization for Marriage, Liberty Counsel and other pro-family organizations that are working to protect and promote natural marriage and family. We support the vigorous but responsible exercise of the First Amendment rights of free speech and religious liberty that are the birthright of all Americans.

Over at Right Wing Watch, People For The American Way reminds us exactly who the haters are with a link farm to recent statements by the above-listed groups.

Via Organizing for America:

This afternoon, a discriminatory policy that deprives our military of qualified troops, endangers our national security, and violates the simple American principles of integrity, fairness, and equality was allowed to remain law.

Every Republican senator but one -- Senator Susan Collins -- voted to prevent the passage of legislation to repeal "Don't Ask, Don't Tell."

Several of them had previously claimed to support repeal, but voted "no" today.

It's a frustrating setback, but here's the good news: We are just three votes away from moving forward on repeal.

And Senate Majority Leader Harry Reid and our allies in the Senate are promising another vote on repeal before Congress heads home for the year. There is still a chance for this to pass.

Write the Republicans standing in the way in the Senate -- and tell them to get on the right side of history.

There's no question that today's vote was disappointing.

But we also have a lot of reasons to be proud today.

The letters to the editor you wrote and the phone calls you made -- and the 582,000 petitions you signed -- have been crucial in building support for repeal.

This morning, OFA volunteers delivered those petitions to Senator Collins' office. And this afternoon, she voted to move this bill forward.

Now your work can help make sure we secure the votes necessary to finally put an end to this unfair policy.

I know we still have a lot of fight left in us. Write Republicans now -- and tell them to stop standing in the way:

Mitch Stewart
Director
Organizing for America
Posted by oreydc at 2:23 AM No comments: Links to this post


"A minority of Senators were willing to block this important legislation largely because they oppose the repeal of 'Don't Ask, Don't Tell.' As Commander in Chief, I have pledged to repeal this discriminatory law, a step supported by the Secretary of Defense and the Chairman of the Joint Chiefs of Staff, and informed by a comprehensive study that shows overwhelming majorities of our armed forces are prepared to serve with Americans who are openly gay or lesbian. A great majority of the American people agree. This law weakens our national security, diminishes our military readiness, and violates fundamental American principles of fairness, integrity and equality.

"I want to thank Majority Leader Reid, Armed Services Committee Chairman Levin, and Senators Lieberman and Collins for all the work they have done on this bill. While today's vote was disappointing, it must not be the end of our efforts. I urge the Senate to revisit these important issues during the lame duck session." - President Barack Obama, in a press release expressing his "extreme disappointment."
Labels: Barack Obama, DADT, military, Senate
posted by Joe   162 comments

Labels: DADT, GOP, military, Senate
posted by Joe
Posted by oreydc at 1:53 AM No comments: Links to this post

Uganda: Kill the gays and all their friends, too

Posted by oreydc at 1:47 AM No comments: Links to this post

Via Belirico Debunking The White Liberal Dog and Pony Show 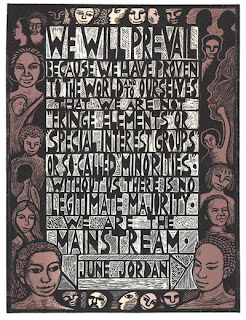 http://www.bilerico.com/2010/12/debunking_the_white_liberal_dog_and_pony_show.php
Posted by oreydc at 1:41 AM No comments: Links to this post