Posted by oreydc at 3:29 PM No comments: 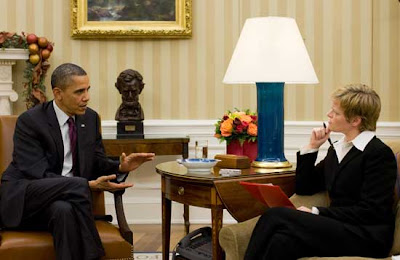 Yesterday the president sat down with Advocate reporter Kerry Eleveld, who reminded him of his recent comment that his position on same-sex marriage has been evolving.

OBAMA: I'm not going to make more news today. The sentiment I expressed then is still where I am—which is, like a lot of people, I'm wrestling with this. My attitudes are evolving on this. I have always firmly believed in having a robust civil union that provides the rights and benefits under the law that marriage does. I've wrestled with the fact that marriage traditionally has had a different connotation. But I also have a lot of very close friends who are married gay or lesbian couples.

OBAMA: And squaring that circle is something that I have not done yet, but I'm continually asking myself this question and I do think that—I will make this observation, that I notice there is a big generational difference. When you talk to people who are in their 20s, they don't understand what the holdup is on this, regardless of their own sexual orientation. And obviously when you talk to older folks, then there’s greater resistance. And so this is an issue that I'm still wrestling with, others are still wrestling with. What I know is that at minimum, a baseline is that there has to be a strong, robust civil union available to all gay and lesbian couples.

Eleveld then pressed the president as to a timeline for "getting there" on marriage. Obama: "I'm going to stick with my answer."
Labels: Advocate, Barack Obama, LGBT rights, marriage equality
reposted from Joe
Posted by oreydc at 3:26 PM No comments:

'Yes We Did': President Obama Speaks Before Signing DADT Repeal

Posted by oreydc at 3:24 PM No comments:

Quote of the Day: Dalai Lama

People often expect the other person to respond first in a positive way, instead of taking the initiative to create that possibility. I feel that's wrong; it can act as a barrier that just promotes a feeling of isolation from others. To overcome feelings of isolation and loneliness, your underlying attitude makes a tremendous difference - approaching others with the thought of compassion in your mind is the best way.

Posted by oreydc at 2:51 PM No comments: