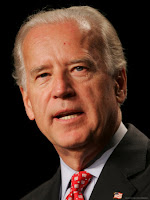 During an appearance on the Today Show, this morning Vice President Joe Biden said that he agreed with the president's "evolving" position on gay marriage and that a "national consensus" on the issue is inevitable.

“I think the country’s evolving,” he said. “And I think you’re going to see, you know, the next effort is probably going to be to deal with so called DOMA [Defence of Marriage Act].” DOMA prohibits federal government from recognising gay marriage, meaning that even if states allow the practice, gay couples still cannot access federal benefits. Mr Biden added that attitudes had changed to openly gay soldiers and that consensus was beginning to turn in favour of gay marriage. He said that gay troops were now “widely accepted” and “the same thing is happening now in regard to the issue of marriage.”