Scott Lively: How Do We Know David Kato Wasn't Killed By His Gay Lover? 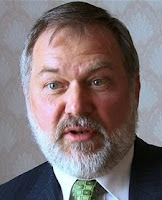 Keeping with his theme of the inherent murderous violence of gay men, today repulsive anti-gay activist Scott Lively issued a statement raising the possibility that Uganda LGBT activist David Kato was killed by another gay man.

Ugandan homosexual activist David Cato was murdered yesterday in his home. To my knowledge, no one has been arrested for the crime so the motive at this time is purely a matter of conjecture. CNN is reporting that money and clothing had been stolen from his house, which would suggest a run-of-the-mill criminal intent. There is also the possibility that he was killed by a “gay” lover, as was the case with another homosexual activist two weeks ago in New York. Carlos Castro was castrated with a corkscrew by his boyfriend and bled to death in his hotel room.

The Boston Globe calls Lively's statement "feeble and callous." And note that not only does Lively (probably intentionally) misspell Kato's name, he fails to express any regret over the murder. As for police claims that the crime was motivated by robbery, here's what Box Turtle Bulletin's Jim Burroway thinks:

Police are attributing David Kato’s murder to robbery. We’ve seen it often enough elsewhere in Europe and America where local authorities are loathe to investigate hate crimes. The mere fact that items are missing doesn’t mean that a hate crime did not occur. If a homophobe is burning a gay man to death, for example, why not take a watch as a trophy and money to party with later? Yet that’s often enough for police to quickly try to eliminate the stigma of a hate crime in the local community. If police in this country are very resistant to investigate crimes as hate crime even when the evidence for those charges are overwhelming, how can we expect anything different in Uganda?