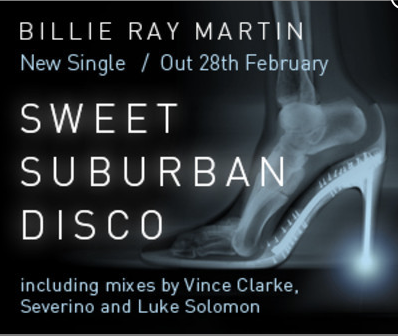 The fantastic Billie Ray Martin is back with Sweet Suburban Disco, a lovely electro number reminiscent of her stone late 80s club classics with Electribe 101 (Talking With Myself, Tell Me When The Fever Ended) and her 1995 global solo smash, Your Loving Arms. The new track and its remixes drop on iTunes on February 28th. (The remix by Erasure's Vince Clark is especially tasty.) Courtesy of Billie's U.S. promoters, here's a JMG sneak of the radio edit.

Joe says,
RELATED: Back in '95, I somehow saw Billie perform Your Loving Arms three nights in a row at clubs in three different cities: South Beach's Club 1235/Paragon/Level, some forgotten place in West Palm Beach, and at Fort Lauderdale's The Stud, which was the best leather disco that ever used to be a Red Lobster. I wasn't stalking her, I just went out a really, really lot in those days.