UPDATE: GOP Rep. Chistopher Lee (NY) resigned tonight "effectively immediately" in the light of the scandal detailed below. Lee sent Fox News a short statement announcing his resignation and expressing regret "for the embarrassment caused to my wife and family." 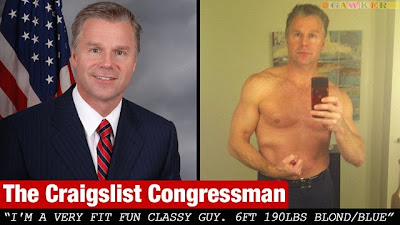 Gawker has posted the Craigslist ad of married GOP Rep. Christopher Lee (R-NY), who has allegedly been using the site's "Women Seeking Men" section to seek out adulterous hook-ups in the Washington DC area. The gossip site has posted screen shots of numerous emails purportedly exchanged between Lee and a woman he angered by lying about his marital status.


Yesterday, we reached out to Rep. Lee, whose support for "Don't Ask, Don't Tell" and vote to reject federal abortion funding suggests a certain comfort with publicly scrutinizing others' sex lives. A spokesman for the Congressman confirmed that the email address belonged to Lee, and that he had deleted his Facebook account because our initial inquiry had him fretting about "privacy." (A screenshot of his account before it vanished is at right.)

So did the married Republican prowl Craiglist looking for hook ups? After first telling us that he couldn't comment until we forwarded every single email in question, a request we refused—shouldn't Lee know if he's corresponded with women on Craigslist?—Lee's spokesman eventually announced that the Congressman believed he'd been hacked, and provided an email he claims Lee sent to his staff about the security breach on January 21.

As noted above, Lee was among the U.S. House members who voted to retain DADT. His position on other LGBT rights such as same-sex marriage appears to be unknown at the moment.
Labels: adultery, Craigslist, Gawker, GOP, scandal
reposted from Joe
Posted by oreydc at 4:02 AM