Via AmericablogGay: Did Obama just come out for same-sex marriage on Facebook?

Check out the ad the Obama campaign is running on Facebook. If you didn't know any better, you might think the President is for marriage equality (he's not). 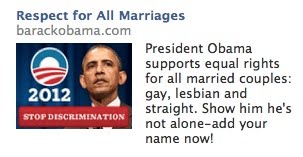 What's actually going on is that the Obama campaign, and White House, have been trying to pull the wool over the community's eyes with a little bit of rhetorical trickery. The president is for equal rights for all couples, gay and straight, they keep telling us. And the proof they use is that he's for repealing DOMA (and that Facebook ad lands on a page about DOMA). What they don't say is that the only way to get those equal rights is for us to get married, and the President isn't for that (he was for it, then decided to run for federal office and suddenly his position changed).
So the President says he supports equal rights for all married couples, and refers to gay couples as married in the ad, even though he opposes our marriages, which will stop us from getting the very equal rights he claims to support.
Someone in the White House and the Obama campaign thought they were mighty smart using this "I'm for equal rights" language in order to trick you into thinking he is.  He's not.
Though this ad does beg one further question: Does President Obama consider gay couples married in Massachusetts or Iowa or Washington, DC "married"?  Are they "married," Mr. President?

make the jump here to read the full article
Posted by oreydc at 12:09 PM