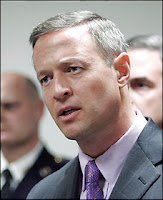 As Maryland's activists gear up to take another run at marriage equality, Gov. Martin O'Malley has pledged his full support.

"I certainly plan to be very active in support of it, and we'll have other announcements in upcoming months," O'Malley said at the National Governors Association meeting in Salt Lake City. O'Malley has long supported civil unions and has said that if lawmakers passed a bill legalizing same-sex marriage, he would sign it. But Friday marks the first time O'Malley has made same-sex unions a legislative priority. The Democratic governor said he would favor a measure in Maryland that mirrors the same-sex marriage law recently enacted in New York, which protects religious organizations from being required to ordain same-sex marriages.