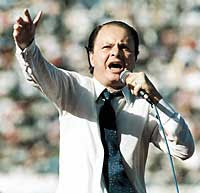 A major religious scandal is exploding in Brazil after one of the nation's best known anti-gay televangelists, Edir Macedo, was charged with embezzling $300M from his impoverished followers.

Three leading members of one of Brazil's most powerful churches have been accused of laundering millions in church donations and using worshippers' money for personal gain. The charges, unveiled on Monday by São Paulo's public prosecutor, relate to 404m reals (£150m) allegedly obtained from mostly impoverished churchgoers by leaders at Brazil's Universal Church of the Kingdom of God. The money was subsequently channelled out of the country via a network of offshore bank accounts and money changers, federal prosecutors claimed. Among those charged is Bishop Edir Macedo, a controversial televangelist who founded the church in 1977, and his financial director, Alba Maria Silva da Costa.

Prosecutors says the actual amount funneled to offshore accounts could exceed $1 billion. Macedo is known for fiery condemnations of homosexuals and for his promise that donations to his ministry will be "returned ten-fold by Jesus." His church reportedly has eight million members worldwide.
Labels: Brazil, con men, religion, scam artists, scandal
reposted from Joe
Posted by oreydc at 6:02 PM