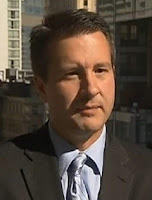 Last year when the news broke that Rep. Jesse Jackson Jr. (D-IL) had cheated on his wife, Chicago Tea Party president Steve Stevlic went on a Twitter-fueled crusade to denounce the congressman for destroying the sanctity of his marriage. You all KNOW what comes next, right?

TeaCon was supposed to be the culmination of all the work that Chicago Tea Party Director Stevan Stevlic put into building the party. But Stevlic, of Cicero, ended up skipping the event Saturday after news broke about his arrest for soliciting a prostitute more than a year ago. Stevan Stevlic, then 36, was arrested June 25, 2010, in the 1600 block of South Kilbourn for misdemeanor solicitation of prostitution, a police source confirmed to the Sun-Times Saturday. The arrest was first reported on the website Gawker, which said the charges were dropped after Stevlic agreed to participate in a rehab program.

Stevlic has now locked his Twitter feed so nobody can screencap all that moral outrage directed at Rep. Jackson. (Tipped by JMG reader Rich)
Labels: hypocrisy, prostitution, sanctity of marriage, Tea Party
reposted from Joe
Posted by oreydc at 3:44 PM