Via JMG: Quote Of The Day II - Father Cutie 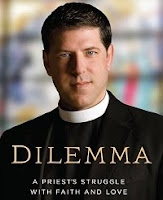 "There are so many homosexuals, both active and celibate, at all levels of clergy and Church hierarchy that the church would never be able to function if they were really to exclude all of them from ministry." - Father Alberto Cutie (his real name), in his new book which slams the Catholic Church as misogynistic and hypocritical.

Cutie left the priesthood in 2009 after a Miami tabloid photographed him making out with the woman who eventually became his wife. Prior to being outed as a heterosexual, Cutie had been something a pop star in Latin media, earning him the nickname, "Father Oprah."
Labels: Alberto Cutie, books, Catholic Church, Quote Of The Day, religion
reposted from Joe
Posted by oreydc at 5:13 PM No comments:


RNC Chairman Michael Steele is fighting for his job at today's debate, where every single candidate responded to NOM's question on marriage equality by invoking Jeebus, traditional values, and the sanctity of one man-one woman.