it gets better-----a music video by rebecca drysdale

Posted by oreydc at 11:55 PM No comments: Links to this post

Via JMG: Doom And Gloom For LGBT Rights As The New Congress Takes Office Today

As the new Congress is sworn in this week, there is no denying that pro-LGBT numbers have shrunk on Capitol Hill. A Human Rights Campaign analysis shows a pick-up of 53 House seats to anti-LGBT lawmakers as well as a 5 seat addition in the Senate. Not only do those opposing basic equality hold positions of power as House leaders and committee chairmen, their ranks have swollen to 225 – a solid majority of the chamber. This presents not just a roadblock to progress but also the threat of legislation that could be damaging to the community.

HRC warns that in addition to blocking any progress on pending LGBT rights legislation, the GOP may attempt to roll back recent advances by cutting funding for the Hate Crimes Act or by attempting to block the recent edict allowing hospital visitation privileges.
Labels: Congress, GOP, HRC, LGBT rights
reposted from Joe
Posted by oreydc at 11:47 PM No comments: Links to this post

New Mexico Attorney General Gary King has issued an opinion declaring that his state can legally recognize same-sex marriages from other jurisdictions.

“While we cannot predict how a New Mexico court would rule on this issue, after review of the law in this area, it is our opinion that a same-sex marriage that is valid under the laws of the country or state where it was consummated would likewise be found valid in New Mexico,” King said. While 40 states explicitly bar gay marriage, King says that New Mexico’s law does “not explicitly address the recognition of same-sex marriages from other jurisdictions,” according to the release announcing the opinion.

Currently only New York, Rhode Island and Maryland do not perform same-sex marriages, but do recognize them from elsewhere.
Labels: LGBT rights, marriage equality, New Mexico
reposted from Joe
Posted by oreydc at 11:40 PM No comments: Links to this post 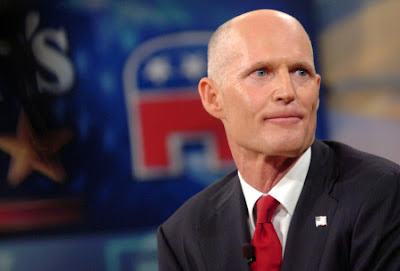 "Governor Scott did not even include all of the classifications listed in the Florida Civil Rights Act -- let alone sexual orientation and gender identity," said Rand Hoch. As President and founder of the Palm Beach County Human Rights Council, Hoch has become a familiar voice on behalf of equality issues in South Florida. He called Scott’s view of diversity “limited and very discouraging” according to an article by Steve Rothaus with the Miami Herald. By ignoring the categories of “handicap” or “marital status” in his new non-discrimination policy, Scott has actually managed to add discrimination to the Florida Government policies which was not previously there. Those two categories are protected by Florida Law under our Civil Rights Act and many advocacy groups have been working tirelessly to add “sexual orientation” and “gender identity” to the language as well.

RELATED: In 2002 the hospital group founded by Scott pleaded guilty to the largest Medicare fraud scheme in U.S. history, eventually paying an all-time record $2B in fines and settlements. Following a raid at his office by the feds, Scott was forced to resign, taking with him a mere $350M in stolen government money.
Labels: douchenozzles, Florida, frauds, LGBT rights, Medicare, Rick Scott, teabaggers
reposted from Joe
Posted by oreydc at 11:32 PM No comments: Links to this post

While this is not exactly sports-specific, a recap of new research contradicts some long-held beliefs about being a gay teenager. Basically, according to this excellent article by Jane Brody in the New York Times, gay teens aren’t much different than their straight counterparts.


The good news is that recent research finds more similarities than differences among gay and straight adolescents. For example, studies in Salt Lake City by Lisa Diamond, an associate professor of psychology and gender studies at the University of Utah, found that young gays had as many friends and were just as popular and socially connected as other teenagers.

END_OF_DOCUMENT_TOKEN_TO_BE_REPLACED

Posted by oreydc at 3:10 AM No comments: Links to this post

Via Belirico: Were LGBT people really fine with Obama back in October?

I've stayed out of the "Obama totally sucks for not giving me my rights" camp,

but this is ridiculous:


The normal questions pop into my mind when it comes to LGBT polling (like, uh, where did they find their queers?), but there won't be any answers:

Continue reading "Were LGBT people really fine with Obama back in October?" »

Posted by oreydc at 2:45 AM No comments: Links to this post

In an op-ed written for Al-Jazeera, peace activist Cindy Sheehan lets loose with her opinion on the repeal of Don't Ask Don't Tell. While she is supportive of LGBT rights, she echoes some of the opinions of Bilerico contributors who've worried that fighting for the right to kill brown people halfway around the world isn't exactly a way to advance human rights. Posted by oreydc at 2:43 AM No comments: Links to this post

Posted by oreydc at 1:48 AM No comments: Links to this post

Posted by oreydc at 1:47 AM No comments: Links to this post