Posted by oreydc at 6:44 PM No comments: Links to this post

Via JMG: Cindy Jacobs: God Will Destroy CA With An Earthquake If Prop 8 Is Repealed 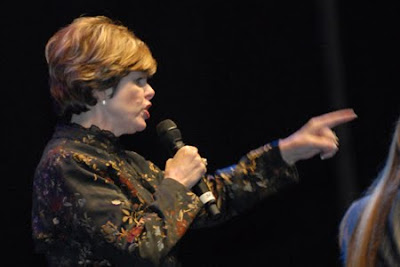 "A pastor of a large Nazarene Church had a dream of a very large earthquake on the central coast. He shared this at the Christmas gathering for all the Santa Maria Pastors and 5 cities area. Because of the destruction and intensity of the quake he thought he should tell the Pastors so they could pray into it. Another intercessor in the area had a dream and saw a map of California. She noticed on the map how Pt. Conception juts out into the water. As she looked she saw an 8 with a circle beside it in the waters off Pt Conception. Prop 8 is a foundational covenant issue, i.e. issue of marriage, in the state. If the state supreme court does not uphold it, a covenant issue is broken with God. Judgment is looming." - Whackadoodle preacher Cindy Jacobs, who says God will split California in half if Proposition 8 is repealed.
Labels: bigotry, California, crazy people, Proposition 8, religion
reposted from Joe
Posted by oreydc at 3:39 PM No comments: Links to this post

Via JMG: Quote Of The Day - Andrew Breitbart

"The point is to welcome people into the big tent. I'm working on getting a venue. The first annual Roy Cohn CPAC Breitbart Homocon Welcoming 80's Extravaganza. I'm thinking of DJ-ing." - Wingnut commentator Andrew Breitbart, invoking the name of the most detested self-loathing homosexual in history to describe the party he says he'll throw for GOProud at this year's CPAC.

Breitbart, who says he supports GOProud's inclusion at the event, is using the controversy to ramp up his long-running feud with World Net Daily. We thank him for making the GOProud-Roy Cohn connection.
Labels: Andrew Breitbart, CPAC, GOProud, homocons, kapos, Quislings, Quote Of The Day, Roy Cohn, World Net Daily
reposted from Joe
Posted by oreydc at 3:36 PM No comments: Links to this post 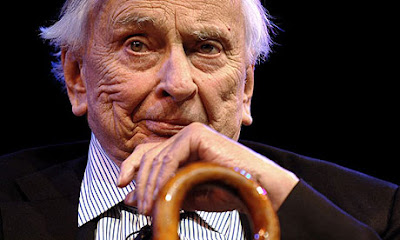 "She is too stupid to deserve an answer." - Gore Vidal, responding to Michele Bachmann's claim that she became a Republican after being horrified by Vidal's "trashing" of the Founding Fathers in his 1973 novel, Burr.
Labels: crazy people, Gore Vidal, HomoQuotable, Michele Bachmann
reposted from Joe
Posted by oreydc at 5:36 AM No comments: Links to this post

Yesterday Chick-Fil-A finally addressed the news that it was sponsoring an anti-gay marriage seminar hosted by the Pennsylvania Family Institute.

"To our Facebook community: First and foremost, thanks for your patience as we made sure we gathered the facts in regards to recent postings. We have determined that one of our independent Restaurant Operators in Pennsylvania was asked to provide sandwiches to two Art of Marriage video seminars," said the restaurant. "As our fans, you know we do our best to serve our local communities, and one of the ways we do that is by providing food to schools, colleges, civic groups, businesses, places of worship, not-for-profit groups, etc. At his discretion, the local Operator agreed to simply provide a limited amount of food. Our Chick-fil-A Operators and their employees try very hard every day to go the extra mile in serving ALL of our customers with honor, dignity and respect."

That seems to be a reasonable response, right? Oh, but hang on. Good As You's dogged Jeremy Hooper has uncovered extensive ties between Chick-Fil-A's charitable arm, the WinShape Foundation, and virtually all of the major organizations fighting marriage equality, including NOM's Ruth Institute, which famously demanded that gays return the "Christian rainbow." So much for "honor, dignity and respect." Chick-Fil-A's press release is nothing by lying bullshittery. Hit the link for the evidence.
Labels: bigotry, fast food, liars, NOM, religion, Ruth Institute
reposted from Joe
Posted by oreydc at 5:16 AM No comments: Links to this post

Via JMG: About Those "GetEQUAL" Comments


I've been getting quite a few emails complaining that someone purporting to represent GetEQUAL has been spamming the JMG comments with requests for donations. Last night I'm grumbled about it on Facebook, after which GetEQUAL's Robin McGehee immediately called to let me know that they are NOT behind these donation requests, which have been appearing across the LGBT blogosphere.

As it turns out, the spamming campaign is being done to discredit GetEQUAL, rather successfully so, considering how you folks have reacted. In fact, multiple sockpuppet accounts have been created on LGBT blogs wherein the same anonymous person or persons then attack GetEQUAL for daring to request donations. Pretty clever, eh?

According to numerous folks, this dumbass campaign is the work of "AndrewW", a prolific commenter recently banned on sites such as The Bilerico Project and Pam's House Blend. McGehee has tried in vain to learn of AndrewW's true identity, even offering a personal $500 reward to anybody that can out him. Some IP traces have placed AndrewW in Plano, Texas, but searches I performed on three different IP's left here on JMG turned up locations in San Diego, Los Angeles, and Santa Barbara. That suggests that either AndrewW has cohorts or that he is adept at spoofing IP addresses.

Jump into the comments on this post with your tips and information about this issue, including clues (and there do appear to be some) to AndrewW's identity. Regardless of what you may feel about GetEQUAL's political tactics and mission, they don't deserve this bullshit. As I told Robin McGehee last night, we here at JMG have an army of of very, very smart IT bear geeks at our disposal. Fly, my winged monkeys! Fly!
Labels: blogging, GetEQUAL, JMG, JMG community
reposted from Joe
Posted by oreydc at 5:15 AM No comments: Links to this post

Via JMG: Billboard Of The Day 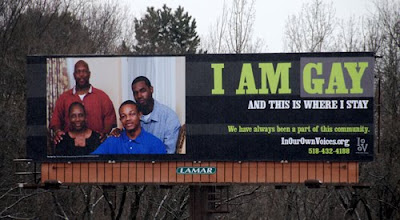 JMG reader Gavin snapped this billboard on Interstate 90 near Albany, New York. More about the sponsoring organization can be found here. I love it.
Labels: advertising, Albany, New York state
reposted from Joe
Posted by oreydc at 5:11 AM No comments: Links to this post

LEAD WITH LOVE follows four families' experiences in learning that they have a gay or lesbian child. Created for parents who are working through this news themselves, this poignant and informative film shares real stories from parents and children, factual information from psychologists, educators, and clergy, and concrete guidance to help parents keep their children healthy and safe during this sometimes challenging time.

Watch the film online for free.

Posted by oreydc at 5:08 AM No comments: Links to this post