Steven Thomma, McClatchy Newspapers: "President Barack Obama has bounced back from his low point after November's elections and enjoys stronger support heading into the 2012 election cycle, particularly against Sarah Palin, according to a McClatchy-Marist poll released Thursday. Obama's fortunes appear to be rising along with the country's. The poll found a jump in the number of people who think the country's heading in the right direction. Also, the president probably benefited from the productive post-election session of Congress."

Read the Article
Posted by oreydc at 7:58 PM No comments: Links to this post

"I don’t know when or if that will ever happen. I think because since most of the world is straight — and maybe we'll get to a place where this will happen — most of the world is straight and we want the audience to project their hopes and dreams for love and romance onto those actors. And if it’s not in some way possible, maybe never probably, in their mind that it could never happen, then they're not going to do it. You know, most people are straight, and I think that’s probably why."- Glee star Jane Lynch, telling After Elton why she thinks openly gay actors are rarely cast in leading roles.
Labels: After Elton, gay artists, HomoQuotable, Jane Lynch
reposted from Joe
Posted by oreydc at 3:29 PM No comments: Links to this post

Via JMG: Press Release Of The Day


From the Canadian Broadcast Standards Council, in its ruling that radio stations may no longer play Dire Straits' 1985 smash, Money For Nothing:

Like other racially driven words in the English language, “faggot” is one that, even if entirely or marginally acceptable in earlier days, is no longer so. The Panel finds that it has fallen into the category of unacceptable designations on the basis of race, national or ethnic origin, colour, religion, age, gender, sexual orientation, marital status or physical or mental disability. In addition to the terms already so categorized by previous CBSC Panels, there are undoubtedly other racial epithets (not yet the subject of CBSC Panel decisions) that would likely fall into the category of words that are inherently problematic. In any event, the Atlantic Regional Panel concludes that the use of the word “faggot” in the song “Money for Nothing” was unacceptable for broadcast and that, by broadcasting an unedited version of the song, CHOZ-FM breached Clause 2 of the CAB Code of Ethics, and Clauses 2, 7 and 9 of the Equitable Portrayal Code. The Panel notes parenthetically that the song would not otherwise fall afoul of any of the foregoing broadcast standards if suitably edited.


The Department of Justice yesterday filed its defense of the overturn of Section Three of the Defense of Marriage Act, which was ruled unconstitutional last July in Gill v. Office of Personnel Management and Massachusetts v. United States.

A quote from the government's brief comes via Chris Geidner at Metro Weekly:

DOMA is supported by rationales that constitute a sufficient rational basis for the law. For example, as explained below, it is supported by an interest in maintaining the status quo and uniformity on the federal level, and preserving room for the development of policy in the states. When DOMA was enacted, the institution of marriage had long been understood as a formal relationship between a man and a woman, and state and federal law had been built on that understanding. But our society is evolving, and as is well-established, the “science of government . . . is the science of experiment.” Over the years, the prevailing concept of marriage has been challenged as unfair to a significant element of the population. Recently there has been a growing recognition that the prevailing regime is harmful to gay and lesbian members of our society.

"There are some improvements in tone in the brief, but the bottom line is the government continues to oppose full equality for its gay citizens. And that is unacceptable. The administration claims that it has a duty to defend the laws that are on the books. We simply do not agree. At the very least, the Justice Department can and should acknowledge that the law is unconstitutional."

And from GLAD, who won the case, we get this response via press release.

The government’s appeal follows a decision issued on July 8, 2010 by federal District Court Judge Joseph L. Tauro in favor of GLAD’s plaintiffs, seven married couples and three widowers, who have been denied access to federal programs because of DOMA. In that decision, Judge Tauro concluded that DOMA is unconstitutional. “We see nothing really new in this brief, which reiterates many of the same arguments the government made in the District Court,” said Mary L. Bonauto, who is leading the DOMA team for GLAD. “We’re prepared to meet these arguments head-on, and bring to an end the discrimination that is suffered by married same-sex couples like our plaintiffs and that DOJ has admitted is caused by DOMA.” 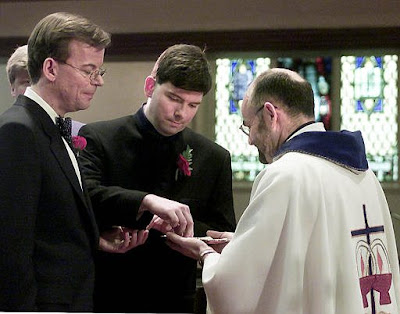 Same-sex marriage became legal across Canada in July 2005. But that road to national equality began in ten years ago today in Toronto, when Joe Varnell and Kevin Bourassa were married in the Metropolitan Community Church, a ceremony that was later ruled legal when it was performed. Starting in 2003, with Ontario leading the way, province after province legalized same-sex marriage, ultimately resulting in the landmark Civil Marriage Act in 2005. Congratulations, Canada!