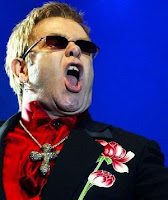 "I think I have it all. I have a wonderful career, a wonderful life. I have my health, I have a partner of 17 years, and now I have a son. I don't have everything because I don't have the respect of people like the church or like politicians who tell me that I'm not worthy, that I'm lesser because I'm gay, well FUCK YOU!" - Elton John, speaking after performing at an AFER fundraiser in Los Angeles. The event raised $3M for the overturn of Proposition 8.
Labels: AFER, Elton John, HomoQuotable, Los Angeles
posted by Joe
Posted by oreydc at 10:28 PM No comments: Links to this post


According to a just-released report from the federal Government Accountability Office, in the last five years almost $200M was spent on ejecting gay troops. Most of that money went to training replacements. 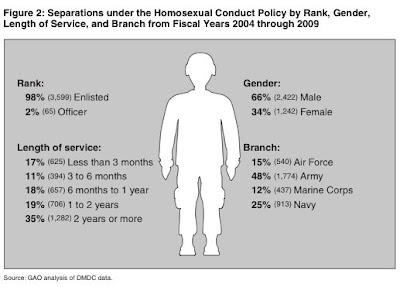 Labels: DADT, federal government, military
reposted from Joe
Posted by oreydc at 10:16 PM No comments: Links to this post

Via JMG: This Is Jim 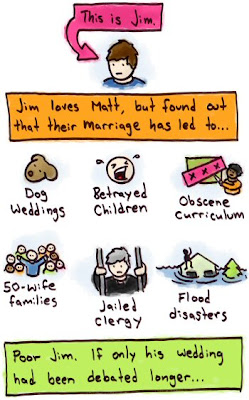 "I am not endorsing gay marriage, I'm not endorsing Don't Ask, Don't Tell. I will be the harshest critic of the activist gay left, who I fear more than al-Qaida. But for these people not to exist in a two-party system, for you to tell them they're not welcome in the big tent, I have a huge problem with that and I'm going to indulge in my all '80s Depeche Mode, Cure, New Order fetish and we're going to have a big 'ol gay party at CPAC." - Wingnut commentator Andrew Breitbart, announcing that he has joined GOProud's board of directors.

That's right, folks, GOProud has hired a guy who says that gay activists are worse than the terrorists who brought down the World Trade Center. You can't make it up. Soon to join GOProud: Bryan Fischer, Tony Perkins, Peter LaBarbera.
Labels: Andrew Breitbart, GOProud, kapos, PhoboQuotable, Quislings
reposted from Joe
Posted by oreydc at 10:13 PM No comments: Links to this post 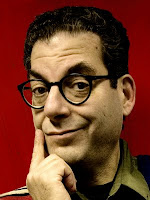 "Calvin, darling, you're embarrassing yourself. What's worse, you're embarrassing the whole community. You were never really that much of a gay hero in the first place. Remember when you suddenly had a wife because, as AIDS made it uncool to be gay, you took the wussy way out and closeted yourself so you could sell more T shirts and perfume? That was a hideous approach and I screamed my lungs out about it--but it was better than now! Now you've hooked up with that almost-21-year-old ex-porn star, Nick Gruber, and you're fawning over him as if this were real love and not a massive late-life crisis being acted out for the horrified masses. It's not going to work!" - Michael Musto, dishing Calvin Klein for the invitation to Gruber's birthday party, which describes the event at "the hottest ticket for New York's gay and fashion elite!"
Labels: Calvin Klein, gay porn, HomoQuotable, Michael Musto
reposted from Joe
Posted by oreydc at 10:00 PM No comments: Links to this post


From the Department of Housing and Urban Development, which notes that a 2007 study showed that 30% of same-sex couples in Michigan faced discrimination when attempting to rent or buy a home.


The U.S. Department of Housing and Urban Development today proposed new regulations intended to ensure that its core housing programs are open to all eligible persons, regardless of sexual orientation or gender identity. View the proposed rule announced today. “This is a fundamental issue of fairness,” said HUD Secretary Shaun Donovan. “We have a responsibility to make certain that public programs are open to all Americans. With this proposed rule, we will make clear that a person’s eligibility for federal housing programs is, and should be, based on their need and not on their sexual orientation or gender identity.”

HUD is seeking public comment on a number of proposed areas including: Prohibiting lenders from using sexual orientation or gender identity as a basis to determine a borrower’s eligibility for FHA-insured mortgage financing. FHA’s current regulations provide that a mortgage lender’s determination of the adequacy of a borrower’s income “shall be made in a uniform manner without regard to” specified prohibited grounds. The proposed rule would add actual or perceived sexual orientation and gender identity to the prohibited grounds to ensure FHA-approved lenders do not deny or otherwise alter the terms of mortgages on the basis of irrelevant criteria.

HUD is also launching the first-ever national study of housing discrimination against LGBT Americans. On Monday HUD begins accepting public comments on the proposed law. I'll post a reminder, you know the haters will be ALL over it.