"It is remarkable that two of the so-called 'greatest presidents' have also allowed the greatest perpetrations and perpetuations of mass murder. Franklin D. Roosevelt was shamefully inept in dealing with 'the Jewish question,' (see my play The Normal Heart), most ironically since so many Jews were his most loyal supporters, the Jerry Zipkins of their day. No one really writes about this. Roosevelt is one of history’s great gods. Just as no one really writes about Reagan and 'the gay question.' These two major murderers so far have gotten away with helping to cause the two major holocausts of modern history. Just as Jews are asked to never forget their Holocaust, I implore all gay people never to forget our holocaust and who caused it and why.

"Ronald Reagan did not even say the word 'AIDS' out loud for the first seven years of his reign. Because of this, some 70 million people, so far, have become infected with HIV/AIDS. I wonder what it feels like to be the son and the wife of a man responsible for over 70 million people so far becoming infected with a virus that has killed over half of us so far. I wonder what it felt like while he was alive to ponder this. For surely he must have thought about it. How could he not? He has been called the consummate actor who came to believe all his lines. Does this not make his legacy even more grotesque? It should. Hitler knew what he was doing. How could Ronald Reagan not have known what he was doing? But of course, no one is writing about this. Reagan too is one of history's gods. So far he has gotten away with murder." - Larry Kramer in a 2004 article reposted today by the Advocate.
Labels: HIV/AIDS, Larry Kramer, LGBT History, Ronald Reagan
reposted from Joe
Posted by oreydc at 7:55 PM No comments: 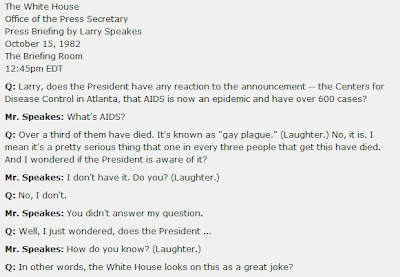 Laughter about dead queers. At the White House. It was five long horrifying and desperate years later before Reagan finally personally addressed the AIDS epidemic, when he came out against a public prevention campaign, saying, "Let's be honest with ourselves, AIDS information can not be what some call 'value neutral.' After all, when it comes to preventing AIDS, don't medicine and morality teach the same lessons?" By then, tens of thousands had died.

The problem is whether we are determined to go in the direction of compassion or not. If we are, then can we reduce the suffering to a minimum? If I lose my direction, I have to look for the North Star, and I go to the north. That does not mean I expect to arrive at the North Star. I just want to go in that direction. ~ Thich-Nhat-Han
♥ Namaste ♥ ~ HimalayaCraftsSee More

Posted by oreydc at 4:12 AM No comments: