In an effort to teach a 7-year-old boy named Malcolm the importance of improving the world around him, he was given $140 to donate to the charity of his choice.


After hearing a story on the radio about the mistreatment of gays and lesbians, he selected two charities — the Los Angeles Gay and Lesbian Center and the Human Rights Campaign Foundation.

In a letter to the center, Malcolm wrote, “I am sending you this money because I don’t think it’s fair that Gay people are not treated equally.”

The donation also included a note from Malcolm’s mother, who challenged the center to raise $27,000 in her son’s name. Center officials have launched a campaign to do just that, and they plan to send confirmation that the goal has been reached along with a “big thank you note.”

Click here for more information on donating.
Posted by oreydc at 4:41 PM No comments:

When you say something really unkind, when you do something in retaliation your anger increases. You make the other person suffer, and he will try hard to say or to do something back to get relief from his suffering. That is how conflict escalates. ~ Thich Nhat Hanh

Posted by oreydc at 4:39 PM No comments: 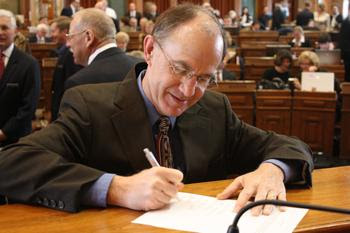 Folks, this one takes the cake.

It would be legal for an Iowa business owner who cites religious beliefs to refuse to provide jobs, housing, goods or services to people involved in a marriage that violates his or her religious convictions, according to a bill an Iowa House subcommittee will consider on Wednesday. House Study Bill 50, called the Religious Conscience Protection Act, would allow a person, business or organization such as a charity or fraternal group to deny services without fear of facing a civil claim or lawsuit if they think doing so would validate or recognize same-sex relationships. The same-sex exclusion is by itself constitutionally troubling, several legal scholars and civil rights activists said. However, the bill is so broad that it would legalize a wide spectrum of other discriminatory acts, they said. They raised questions about whether services could be denied if, say, a Christian were married to a Jew or if a woman who is 60 married a man who is half her age and the couple could not procreate.

Iowa's GOP House Speaker says the bill "has a shot" of passing. Our hero in the state Senate, Mike Gronstal, will likely block the bill from consideration there.
Labels: bigotry, GOP, Iowa, marriage equality, religion
reposted from Joe
Posted by oreydc at 3:34 PM No comments:

"The word marriage is a big deal to people of faith. We’ve made it sacred. That’s why I believe that churches, synagogues, mosques, and temples should have total freedom to have whatever types of unions they believe as godly. But I think that we as a democratic society, as a constitutional republic — if we don’t respect individual civil liberties, then we’re making a horrific mistake. The church is in the early stages of another ‘the earth is flat’ crisis. I say to all religious people that we should be quick to listen, slow to speak, and slow to become angry on the subject. Or we’re going to be embarrassed in another 10 or 20 years." - Ted Haggard, in this week's Advocate cover story.
Labels: drugs, marriage equality, prostitution, religion, scandal, Ted Haggard
reposted from Joe
Posted by oreydc at 3:25 PM No comments: