This week's DOMA news has set activists into high gear on many fronts. Immigration Equality founder Lavi Soloway emails us today with his latest move.

In New York, New Jersey and California three married, same-sex binational couples, two gay male couples and one lesbian couple, are facing Immigration Judges in deportation proceedings. Each will brandish a pending green card petition filed by the American spouse on behalf of the foreign spouse. In each case their lawyer, Lavi Soloway, will argue that deportation proceedings should be halted because the only thing standing between each couple and a green card is the Defense Of Marriage Act which the President and the Attorney General announced this week will no longer be defended in court based on their finding that the statute is unconstitutional. Soloway, an immigration lawyer and long time gay rights activist, argues that the Department of Homeland Security should cease giving effect to this unconstitutional law and put all deportation proceedings on hold where they involve married gay binational couples, who but for DOMA, would be eligible for green cards on the basis of their marriages.

Soloway notes that the issue is quite urgent because deportation from the United States stipulates a ten year ban on ever returning.
Labels: DOMA, feds, immigration, Immigration Equality
reposted from Joe
Posted by oreydc at 11:51 PM No comments: Links to this post 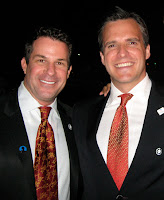 Longtime Obama fundraiser Jeremy Bernard (on left, with former partner Rufus Gifford), has been named White House social secretary. He's the first openly gay man to hold that position and the third in the job since Obama took office.

“Jeremy shares our vision for the White House as the People’s House, one that celebrates our history and culture in dynamic and inclusive ways,” President Obama said in a statement, “We look forward to Jeremy continuing to showcase America’s arts and culture to our nation and the world through the many events at the White House.” Bernard comes to the White House from the US Embassy in Paris, where he served as Senior Advisor to the Ambassador. Prior to this role, he worked as the White House Liaison to the National Endowment for the Humanities.

Via JMG: Sen Patrick Leahy: I Will Cosponsor Feinstein's Bill To Repeal DOMA

As a Vermonter who has been married for 48 years, I believe it is important to encourage and to sanction committed relationships; relationships that encourage us all to give back to our community; and relationships that complete our lives. Vermont led the way by being the first state to adopt a same-sex marriage law through a legislative process. Now that several states that have voted to give full marriage rights to same-sex couples, I believe that the Federal government should not interfere with those laws or discriminate between marriages sanctioned by State law. Vermont and other states have determined that committed same-sex couples and their families should be entitled to all the protection of that state-sanctioned union. The Defense of Marriage Act denies some Vermont families equal treatment, creating a system of second-class citizens. This goes against American values and it must end. In the coming days, I will join with Senator Dianne Feinstein to introduce legislation to repeal the Defense of Marriage Act. It is a core American value that all people should be treated equally by their government. Vermont has been leading the nation on this important civil rights issue and this week, President Obama and Attorney General Holder moved the Federal government in the right direction.

Via JMG: Thrice-Married Serial Adulterer: Obama Could Be Impeached Over DOMA

"I believe the House Republicans next week should pass a resolution instructing the president to enforce the law and to obey his own constitutional oath, and they should say if he fails to do so that they will zero out [defund] the office of attorney general and take other steps as necessary until the president agrees to do his job," said Gingrich. "His job is to enforce the rule of law and for us to start replacing the rule of law with the rule of Obama is a very dangerous precedent."

Gingrich would like to remind everybody that that marriage is between one man and one woman whom you abandon riddled with cancer on her hospital bed while you fuck the shit out of your mistress whom you later marry and cheat on with a third woman while screaming with Godly moral outrage about the infidelities of the president.
Labels: adultery, assholery, Barack Obama, DOMA, hypocrisy, Newt Gingrich, religion
reposted from Joe
Posted by oreydc at 11:43 PM No comments: Links to this post

Posted by oreydc at 2:33 PM No comments: Links to this post