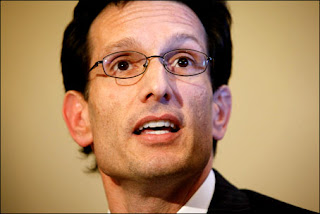 House Majority Leader Eric Cantor said last night that a GOP plan to defend DOMA will be in place by the end of the week. Cantor's announcement came as the GOP completely ended unemployment and the nation's budget crisis, as promised.


“I stand by [Boehner’s] commitment to make that happen,” Cantor (R-Va.) said Monday afternoon at a press conference, promising to outline their plans in detail Friday. Cantor said the Justice Department’s refusal to defend the law is a problem separate from the substance of the law itself, which allows states to decide whether to recognize same-sex unions in other states. The Justice Department has called another provision, that bars same-sex couples from receiving federal-worker benefits, unconstitutional. “Again I do believe that this is a case that is distinguishable on its merits and to have the administration take the position, the president take the position, that he’s not defending the law of the land, is something very troubling I think to most members of the House,” Cantor said. When pressed on what House Republicans planned to do, he demurred. “I think you’ll see that on Friday,” Cantor said.

California Attorney General Kamala Harris today filed a request with the Ninth Circuit Court of Appeals, demanding that they lift their stay on the overturn of Proposition 8 and immediately allow the resumption of same-sex marriages.

Attorney General Harris said it is unlikely that an appeal will succeed in overturning Judge Walker's ruling that Proposition 8 is unconstitutional. The appeal's likelihood of success has been substantially diminished, Attorney General Harris said, "both by the United States Attorney General's conclusion that classifications based on sexual orientation cannot survive constitutional scrutiny and by this Court's certification order to the California Supreme Court, which seriously questions the Court's jurisdiction to decide the merits of the case."

In addition, Attorney General Harris said, "there is no injury that the proponents of Proposition 8 will suffer if same-sex couples are permitted to enter into civil marriages in California." But as long as the stay on same-sex marriages remains in effect, Attorney General Harris said, the due process and equal protection rights of same-sex couples will continue to be violated, perpetuating unconstitutional discrimination and making a stay of Judge Walker's ruling legally inappropriate.

"I have always believed that marriage is between one man and one woman. Like the majority of Americans, I support the Defense of Marriage Act and find it appalling that the Obama administration decided not to defend this federal law which was enacted with broad bipartisan support and signed into law by a Democrat president. It’s appalling, but not surprising that the President has flip-flopped on yet another issue from his stated position as a candidate to a seemingly opposite position once he was elected." - Sarah Palin, as triumphantly quoted today by Maggie Gallagher.
Labels: Barack Obama, bimbos, DOMA, LGBT rights, Maggie Gallagher, marriage equality, Sarah Palin
New! Share this on Facebook: Share
reposted from Joe
Posted by oreydc at 9:12 PM No comments: Links to this post

California's attorney general has asked a federal appeals court to allow gay marriages to resume while the court considers the constitutionality of the state's ban on same-sex unions.
Posted by oreydc at 8:43 PM No comments: Links to this post