The Human Rights Campaign has issued a denouncement of House Speaker John Boehner's vow to force the defense of DOMA. Via press release:

“The decision to mount an all-out defense of DOMA is particularly hypocritical given the Speaker’s contention that the President was distracted from focusing on the economy by DOMA,” said Solmonese. In order to defend the constitutionality of Section 3 of DOMA in court, Congress would likely have to make arguments that could include:

· That gays and lesbians have not faced a history of discrimination
· That one’s sexual orientation is in fact relevant to a person’s ability to contribute to society
· That, contrary to the opinion of experts, sexual orientation is something that can be changed
· That, despite widespread laws such as marriage amendments disadvantaging gays and lesbians, they are politically powerful.
· That the federal government is justified in violating the federalist tradition of leaving marriage and family law to the states

“A far right fringe may be calling for a defense of DOMA, but doing so is sure to turn off independent voters,” said Solmonese. “John Boehner should realize that the world has changed since 1996 and fair-minded Americans won’t like what House Republican leaders have to say when trying to justify federal discrimination against some of a state’s lawful marriages.”

Posted by oreydc at 5:37 PM No comments: Links to this post 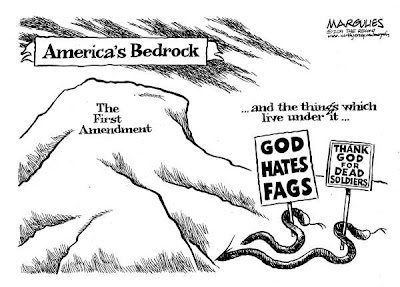 Labels: First Amendment, Supreme Court, Westboro
reposted from Joe
Posted by oreydc at 5:35 PM No comments: Links to this post

Via JMG: Alzheimer's Patient Wants To Marry While He Still Recognizes His Partner

Californians Ed Watson and Derence Kernik have been together for 40 years, but Ed has been been diagnosed with Alzheimer's and the couple is desperately hoping to marry while he can still recognize Derence. In a totally fucking related development, today the American Family Association denounced attempts to have the stay on Prop 8 lifted, using the headline, "Patience Is Not A Homosexual Virtue."

Via JMG: Trump: Gays Deserve No Rights At All

After indicating to the Des Moines Register that he will compete in next year's Iowa caucus should he decide to seek office, Trump was questioned on his stance concerning same sex marriages. "They should not be able to marry," the Celebrity Apprentice star asserted. Trump also admitted that he hasn't developed a "fully formed" opinion on extending medical and civil benefits to gay couples, but he added: "As of this moment, I would say no and no." The TV personality has suggested that he will announce his final decision on whether to launch a presidential bid in the coming months.

GOProud will be so pleased.
Labels: 2012 elections, assholery, bad hair, bigotry, Donald Trump, douchenozzles, GOP, GOProud
reposted from Joe
Posted by oreydc at 5:26 PM No comments: Links to this post

Via JMG: Concerned Women Are Concernstipated About 80s Pop Stars Getting Married

Or so it would seem from their bizarre image accompanying this message:

So, just like any other despot, Obama decided unilaterally to make the decision for all of us ignorant Americans who support DOMA, and we should be grateful. Shame on him. And shame on us if we just stand by silently and take it. We should not! We must speak out. Truthfully, we have been too silent for far too long. President Obama and Mr. Holder have been actively working against DOMA and, therefore, against all Americans ever since they took office. Even on the cases where they decided to “defend” DOMA, they were actually undermining its reasoning by abandoning the most effective arguments.

DOJ’s mission statement says it is “...to ensure fair and impartial administration of justice for all Americans.” But President Obama and the attorney general have made a mockery of impartiality. They have chosen to side with an extreme, liberal minority and chose to suppress the rights of the majority of Americans. Simply put, if you support DOMA, this president and his administration view you as the enemy who does not deserve the same protections other Americans enjoy. We are on our own.

Dear Daniel,
In the wake of President Obama's courageous decision to stop defending the Defense of Marriage Act (DOMA), radical lawmakers have sunk to a new low.
Speaker John Boehner and Majority Leader Eric Cantor have spent this past week working to placate anti-LGBT members of Congress and their right wing base by indicating they will defend DOMA – no matter what it takes.
So much for their pledges to focus on jobs and the economy. These so-called fiscal conservatives are wasting Congress's time and resources to defend discrimination.
We've never taken these attacks sitting down – and we can't start now. Time and again, our opponents lash out when we make progress. And time and again we band together to stop them. We've got to do it again this week, with a rapid-response effort in Congress and beyond. Can you help now?
Join HRC with an urgent gift to sustain the fight against DOMA.
In the past several weeks, HRC has helped drive major victories: civil unions in Hawaii and Illinois; unprecedented progress on marriage equality in Maryland, Rhode Island, and New York; and President Obama's decision on DOMA. All of those phone calls, rallies, letters to Congress, meetings with lawmakers – they're working.
But these victories have pushed our opponents to redouble their efforts to undermine equality.
So we're at a crossroads. We can catapult off of these recent victories and others in Illinois and Hawaii, grab this momentum with both hands and lay a foundation now for a future of full marriage equality – or we can let the extreme right wing dictate America's political agenda.
Right-wing radicals know the tide is turning against them. It's just making them more desperate. Only your generous grassroots support will help us stand strong. We must seize this moment. Are you with us, Daniel?
Join HRC now, and help drive the fight in Congress.
Thank you for helping us win – and for keeping this movement strong.
Best,

Posted by oreydc at 5:20 PM No comments: Links to this post

According to the Los Angeles Times, Newt Gingrich served as middleman for an anonymous donor who gave $200,000 in "seed money" to fund the successful campaign to oust three Iowa state Supreme Court justices.

This year, several potential presidential candidates are vying for attention among religious conservatives. But only Gingrich was instrumental in the most heralded event of recent Christian political activism: The effort last fall to remove the Iowa judges. "It wouldn't have happened without Newt," said David Lane, executive director of Iowa for Freedom, the organization that led the campaign. "Newt provided strategic advice and arranged the initial seed money, about $200,000, which is what got everything started." The money came from an anonymous donor whose contribution was arranged by Gingrich, Lane said. Robert L. Vander Plaats, chief spokesman for the judicial campaign, said the former speaker provided key strategic advice. He said Gingrich had won over pastors in the state with his "open and transparent" approach.

Newt Gingrich would like to remind everybody that that marriage is between one man and one woman whom you abandon riddled with cancer on her hospital bed while you fuck the shit out of your mistress whom you later marry and cheat on with a third woman while screaming with Godly moral outrage about the infidelities of the president.
Labels: adultery, assholery, bigotry, douchenozzles, hypocrisy, Iowa, Newt Gingrich, religion
reposted from Joe
Posted by oreydc at 11:48 AM No comments: Links to this post