Posted by oreydc at 9:45 PM No comments: Links to this post

Via JMG: Photo Of The Day 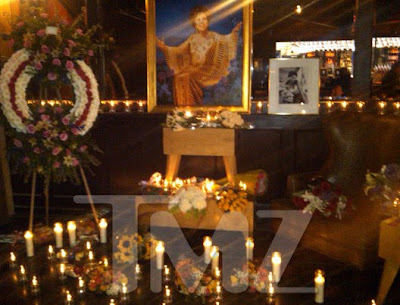 A shrine to Elizabeth Taylor has sprung up in the West Hollywood gay bar The Abbey, where Taylor was known to drop in. This weekend the bar will donate proceeds from sales of their Blue Velvet martini to the Elizabeth Taylor AIDS Foundation.

(Via - TMZ)
Labels: AIDS, California, photo of the day, West Hollywood
reposted from Joe
Posted by oreydc at 9:43 PM No comments: Links to this post

"We are gathered here today to look a gift horse in the mouth. It seems a majority of the American people now favor allowing gay men and lesbians to wed. That majority, according to a Washington Post survey released last week, is slender, just 51 percent. But even at that, it represents a significant increase from just five years ago, when only 36 percent of Americans approved. [snip]

"But lurking at the edge of celebration there is, for me, at least, a nagging, impatient vexation. That vexation is based in what is arguably an esoteric question: In extolling the fact that the majority now approves same-sex marriage, do we not also tacitly accept the notion that the majority has the right to judge? [snip]

"That’s the pebble in the shoe, the popcorn hull between the teeth, that nags at the conscience when one reads polls tracking how many of us approve of other people’s lives and decisions. It’s all well and good that 51 percent of us support the right of gay men and lesbians to tell it to the judge, but really, what hubris makes us think we have a right to say yea or nay in the first place?" - Pulitzer Prize winning columnist Leonard Pitts, writing for the Miami Herald.

(Tipped by JMG reader Will)
Labels: LGBT rights, marriage equality, polls
reposted from Joe
Posted by oreydc at 9:21 PM No comments: Links to this post