Via Belirico: MSNBC's Lawrence O'Donnell Takes on the Catholic Church Over LGBTs

The late author and AIDS activist Paul Monette must be doing a little jig in heaven right now. Wednesday night Lawrence O'Donnell, host of MSNBC's The Last Word, called out the antigay

Monette, as some may remember, tore up a photo of the Pope during a Creating Change conference (caught on tape for the excellent 1996 documentary Paul Monette: The Brink of Summer's End) to protest the enormous and deadly sway the Church had over its followers.

It's a practice the Catholic Church appears to continue today, with some US Bishops threatening to withhold communion from Pro-Choice politicians and chastising the United Nations for its "radical agenda" to re-define gender. This at the same time the US is pushing the UN to expand it's recognition of human rights to include LGBT people. Here's the statement from the US UN Ambassador Susan E. Rice:

Posted by oreydc at 10:01 PM No comments: Links to this post

Dragon Age II has a gay love story in it that's cute that led some straight gamers to complain. You see, since the majority of people are straight, that means that everything has to be washed clean of homosexuality lest it befuddle their minds:

When I say BioWare neglected The Straight Male Gamer, I don't mean that they ignored male gamers. The romance options, Isabella and Merrill, were clearly designed for the straight male gamers in mind. Unfortunately, those choices are what one would call "exotic" choices. They appeal to a subset of male gamers and while its true you can't make a romance option everyone will love, with Isabella and Merrill it seems like they weren't even going for an option most males will like. And the fact is, they could have. They had the resources to add another romance option, but instead chose to implement a gay romance with Anders.
I'm certain that some will declare "That's only fair!" but lets be honest. I'll be generous and assume that 5% of all Dragon Age 2 players are actually homosexuals. I'll be even more generous and assume that the Anders romance was liked by every homosexual. Are you really telling me that you could not have written another straight romance that would have pleased more than 5% of your fans?


It's a lot longer, but you get his point. While LGB people watch tons of movies, play lots of games, read lots of books, and watch lots of TV centered around heterosexuality, for a straight person to have to put up with a gay story (among straight love stories) in a video game is just too much.
But I don't have to respond. Bioware's response is definitely worth reading:
Continue reading "Bioware's Dragon Age II Has Gay Scene that Some Straight Gamers Don't Like" »

Posted by oreydc at 10:00 PM No comments: Links to this post

Via JMG: TENNESSEE: Housing Official Says Gays Are Like Murderers and Drug Dealers


In January, the Department of Housing and Urban Development (HUD) invited public comment on proposed new rules banning discrimination against LGBT people in all its programs. That prompted Vicki Barnes, the executive director of Tennessee's Sweetwater Housing Authority to fire off a letter to HUD in which she compares gay people to murderers, cult members, prostitutes and drug dealers. According to Barnes, if HUD's proposed rules are adopted, landlords will opt out of Section 8 programs rather than "be bullied into accepting tenants who have chosen a lifestyle that goes against their moral convictions." Screen shots of Barnes' detestable letter are below. 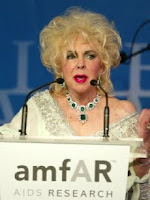 Most of Elizabeth Taylor's massive fortune will go to the two AIDS charities with whom she was most famously associated.


Screen queen Elizabeth Taylor has left behind a fortune worth at least $600 million, much of which is expected to go to the AIDS charities she championed for decades. Her famous jewelry collection, valued at an eye-popping $150 million in 2002, is likely to be auctioned off with the bulk of the proceeds going to the Elizabeth Taylor AIDS Foundation and amfAR, the AIDS charity she helped found in 1985, according to WFLD/Fox TV Chicago. "From what I understand, she seems to have been very wise about her investments," said a financial planner who has worked with other Hollywood A-listers. At the time of her 1994 divorce from her last husband, Larry Fortensky, Taylor's net worth was estimated at $608.4 million. That figure could now be well in excess of $1 billion. During the 1990s, Taylor reportedly earned about $2 per second, or about $63 million per year. Her famed perfume, White Diamonds, earned more than $70 million last year, according to reports.

Our hero, even in death.
Labels: AIDS, amFAR, gay icons, heroes, Hollywood
reposted from Joe
Posted by oreydc at 1:49 PM No comments: Links to this post

Today's "The Republicans really are a bunch of bigotsm, huh?" Post":Haley Barbour: Amorous Gay Soldiers Are Going To Stop Us From Killing Bad Guys

Yesterday Mississippi Gov. Haley Barbour became the third prospective 2012 GOP presidential candidate to promise to reinstate DADT if elected. Because gay soldiers are going to be too busy cruising other men to effectively kill the bad guys.


They did research to see what military people thought about this idea. The closest to the ground, the soldier on the ground, was the most opposed to this. And it's not necessarily over homosexuality. Its over the fact that when you're under fire and people are living and dying of split-second decisions you don't need any kind of amorous mindset that can affect saving people's lives and killing bad guys. You look at the data and it is the foot-soldier that is the person who is out there, boots on the ground, who was most against this. And it's because they live or die with this and that's who we ought to be listening to, that's who we ought to be caring about and that's why I am against it. I think it ought to be rolled back. I just don't see how you can take any other position if the person you are trying to protect is the soldier who is actually in combat.

Labels: 2012 elections, DADT, dumbassery, GOP
reposted from Joe
Posted by oreydc at 1:45 PM No comments: Links to this post