Via HimalayaCrafts: I think I have here...

Your work is to discover your work
And then with all your heart
To give yourself to it. ~ Buddha
Namaste
Posted by oreydc at 11:17 PM No comments:

Via JMG: A Pastor Sees The Light


Pastor Murray Richmond says he used to preach against homosexuality and same-sex marriage, but not anymore.

Why had we singled out homosexuality as a litmus test for True Christianity in the first place? Why had it become such a lightning rod for self-righteousness? One reason, I think, is that it's easy to condemn homosexuality if you are not gay. It is much harder than condemning pride, or lust or greed, things that most practicing Christians have struggled with. It is all too easy to make homosexuality about "those people," and not me. If I were to judge someone for their inflated sense of pride, or their tendency to worship various cultural idols, I would feel some personal stake, some cringe of self-judgment. Not so with homosexuality.

Now I am wondering why, if two gay people want to commit their lives to one another, they should ever be denied that chance. No church or pastor should be forced to perform those ceremonies, and they can choose not to recognize gay marriage for their adherents. But the constitution of the Presbyterian Church does not explicitly forbid a pastor from being a thief, a murderer, or an egotistical jerk. It is not designed to do these things. It does prohibit a gay person from becoming a pastor. All I can ask is: Why? 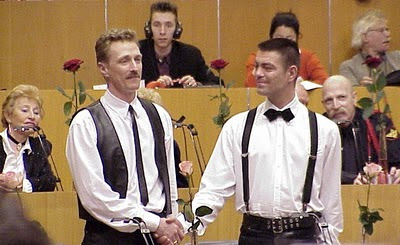 Ten years ago this week, the Netherlands become the world's first nation to legalize same-sex marriage. Veteran reporter Rex Wockner was in Amsterdam's City Hall that night and today he reposts this excerpt from his report on the proceedings:

Amid an international media frenzy, the weddings took place at City Hall as the law became effective at the stroke of midnight. Mayor Job Cohen officiated. As Cohen finished his opening remarks at 11:58 p.m., the audience in the City Council chambers began syncopated clapping as they waited for the room's clock to click over to 12:00. When it clicked, cheers erupted.

RELATED: Canada legalized same-sex marriage nationwide in 2005 in a ruling that made legal a gay wedding that had taken place in January 2001. Call it "ten years with an asterisk."
Labels: LGBT History, marriage equality, Netherlands, Rex Wockner
reposted from Joe
Posted by oreydc at 2:48 PM No comments:

Posted by oreydc at 2:41 PM No comments:

Posted by oreydc at 2:35 PM No comments: