Posted by oreydc at 4:58 PM No comments: Links to this post

Posted by oreydc at 4:43 PM No comments: Links to this post 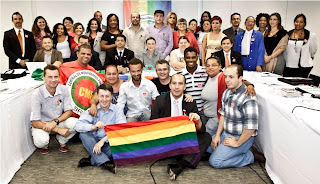 The Council’s purposes and attributes were defined by Presidential Decree No. 7.388, dated December 9th 2010<http://www.planalto.gov.br/ccivil_03/_Ato2007-2010/2010/Decreto/D7388.htm>. It is a collegiate body of both a consultative a deliberative nature and forms part of the basic structure of the Human Rights Secretariat (HRS), directly linked to the Office of the President of the Republic. Its principal purpose is to formulate and propose guidelines for government actions at national level aimed at combating discrimination and promoting the defence of the rights of Lesbians, Gays, Bisexuals and Trans persons – LGBT. In addition, the Council will ensure dialogue between organized civil society and the Federal Government, monitoring and performing a watchdog role over public policies.

The Council is comprised of thirty members, divided equally between the Government and civil society, as listed below. The Council’s civil society members were indicated through a selection and qualification process undertaken in accordance with criteria set by Ministerial Ordinance No. 76, dated February 1st 2011.

In her speech, the Human Rights Minister further stressed what she has been stating publicly since she was appointed to the post at the end of last year, namely that fighting homophobia is a priority of both the Human Rights Secretariat and the Dilma Rousseff Government.

The Council elected Ramais de Castro Silveira as its first president. Silveira is the HRS’s  Secretary for Human Rights Defence and Promotion. Irina Bacci, representing the Brazilian Articulation of Lesbians, was elected Vice-President. Igo Martini (HRS) will be the Council’s Executive Secretary.

One of the principle points discussed during the meeting was the organization of the 2nd National LGBT Conference, expected to be held on December 15th to 18th 2011, having as its theme “For a country free from poverty and discrimination: promoting LGBT citizenship”. The 1st LGBT Conference was held in June 2008.

Another highlight of the meeting was the approval of a public statement condemning racist and homophobic remarks made this week by Federal Representative Jair Bolsonaro (PP-RJ). The Council requested that the Federal Solicitor General begin investigations into the alleged crimes of racism and slander against the LGBT population.

The Council also discussed the School Without Homophobia project, within the sphere of the Ministry of Education, and approved a motion manifesting its support for the project.

The Council approved the creation of three internal Technical Committees (TC) and a working group, as follows:

·         the Permanent TC for the Institutional Articulation, Planning, Budget and  Monitoring of the National Plan for the Promotion of LGBT Citizenship and Human Rights;

·         the Permanent TC for the Monitoring, Prevention and Combating of violence against the LGBT population;

·         the Council’s Internal Regulations Working Group, reporting to the TC on Legislation and Norms.

According to Toni Reis, a member of the Council and president of the national civil society organization ABGLT, “this is a fundamental initiative for accompanying and monitoring the implementation of the decisions of the 1st National LGBT Conference. It also completes the ‘tripod of LGBT citizenship’, which ABGLT has pushed for nationally and is pushing for in all Brazil’s states, state capitals and large cities, namely: Plans for the Promotion of LGBT Citizenship and Human Rights, LGBT Coordinations within the governments’ structures, and LGBT Councils as a watchdog body. By instating this Council, Brazil has taken a quality step forward in the fight to reduce violence, discrimination and stigma against the LGBT community”, Reis added.

The entire meeting was broadcast live via internet (www.aids.gov.br/mediacenter) and drew a lot of attention, reaching the maximum capacity of spectators (500), which is not usually the case with the majority of other council meetings broadcast in this way. The broadcasting of the meeting was made possible by a partnership between the Human Rights Secretariat and the Ministry of Health’s Department of STD, Aids and Viral Hepatitis.

In addition to the Council members, other participants at the meeting were Federal Representative Jean Wyllys (PSOL/RJ), representing the Parliamentary Front for LGBT Citizenship, and representatives of the Federal Public Prosecution Service and the Federal Labour Inspectorate.

The Council’s next meeting will be held on May 19th and 20th. The date marks the week in which ABGLT will hold for the second consecutive year the National March Against Homophobia, as well as being the week in which May 17th will be commemorated as National Day Against Homophobia. In 2009, former president Lula decreed the official recognition of May 17th on the national calendar as the day against discrimination on the grounds of sexual orientation and gender identity.

Composition of the National LGBT Council: