The bill is being driven by the country’s ruling coalition, the Frente Amplio which has a majority in both houses – giving it an excellent chance of succeeding. The bill’s author, Frente Amplio MP, Sebastián Sabini, told the newspaper, “We do not focus so much on the issue of gay marriage but of equal marriage regardless of sex, gender or religion.” The bill, would amend the country’s Civil Code to refer to spouses instead of husband and wife, meaning transgender and intersex people would also be covered, and would allow non-biological parents in a marriage to be given parental rights and obligations to their partners’ biological children.

LGBT rights in Uruguay are already among the most advanced in South America. Gays can serve openly in the military and in 2008 civil unions were made available to couples that have been together for five years.
Labels: LGBT rights, marriage equality, Uruguay
reposted from Joe
Posted by oreydc at 10:35 PM No comments: Links to this post

Via JMG: George Takei has A Ringtone 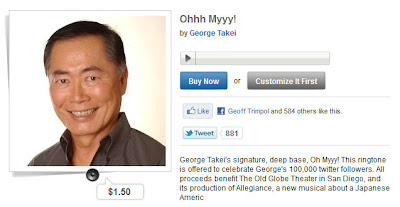 Via JMG: Quote Of The Day - Alan Simpson 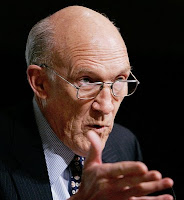 "We have homophobes on our party. That’s disgusting to me. We’re all human beings. We’re all God’s children. Now if they’re going to get off on that stuff—Santorum has said some cruel things—cruel, cruel things—about homosexuals. Ask him about it; see if he attributes the cruelness of his remarks years ago. Foul. Now if that’s the kind of guys that are going to be on my ticket, you know, it makes you sort out hard what Reagan said, you know, 'Stick with your folks.' But I’m not sticking with people who are homophobic, anti-women, moral values—while you’re diddling your secretary while you’re giving a speech on moral values? Come on, get off of it." - Former GOP Sen. Alan Simpson, speaking on MSNBC's Hardball. Hit the link for video.
Labels: 2012 elections, FTW, GOP, homophobia, Quote Of The Day, Rick Santorum
reposted from Joe
Posted by oreydc at 10:24 PM No comments: Links to this post