Tonight the Delaware House passed its civil unions bill by a vote of 26-15. The bill passed last week in the state Senate and is now expected to be signed by Gov. Jack Markell, after which it will go into effect on January 1st, 2012.

SB 30 will allow same-sex couples to enter into civil unions giving them all of the rights, benefits, and obligations of marriage under state law, but would not allow same-sex couples to obtain marriage licenses. Religious institutions may choose not to solemnize civil unions. Delaware will be the 8th state to offer civil unions or comprehensive domestic partnerships. After the bill is signed into law, it will take effect on Jan. 1, 2012. Currently, five states have laws providing an expansive form of state-level relationship recognition for gay and lesbian couples, without offering marriage. California, Nevada, New Jersey, Oregon, and Washington provide same-sex couples with access to almost of all the state level benefits and responsibilities of marriage, through either civil unions or domestic partnerships. Earlier this year, the governors of Hawaii and Illinois signed into law civil unions bills. Couples in Illinois can begin applying for civil union licenses on June 1, 2011 and in Hawaii couples can begin applying on Jan. 1, 2012. Same-sex couples do not receive federal rights and benefits in any state.

Labels: civil unions, Delaware, LGBT rights
reposted from Joe
Posted by oreydc at 9:50 PM No comments: Links to this post

Posted by oreydc at 5:54 PM No comments: Links to this post

Los Angeles Lakers superstar Kobe Bryant announced today that he intends to appeal the $100K fine imposed by the NBA yesterday for his calling a referee a "fucking faggot" during Tuesday night's game.

Bryant, talking from Sacramento on the Mason & Ireland show on ESPN 710 Radio in Los Angeles, said the appeal is "standard protocol," but also took responsibility for his choice of words said "out of frustration during the heat of the game." "The comment that I made, even though it wasn't meant in the way it was perceived to be, is nonetheless wrong, so it's important to own that," Bryant said. He added, "The concern that I have is for those that follow what I say and are inspired by how I play or look to me as a role model or whatever it is, for them not to take what is said as a message of hate or a license to degrade or embarrass or tease. That's something I don't want to see happen. It's important for me to talk about that issue because it"s OK to be who you are, and I do'n't want this issue to be a part of something or to magnify something that shouldn't be."

Labels: faggot, language, NBA, sports
reposted from Joe
Posted by oreydc at 5:50 PM No comments: Links to this post

Via JMG: Quote Of The Day - Ben Cohen "It is disappointing to see this. As a professional athlete and rugby World Cup champion, I understand the heat and passion of competition at the highest levels. But we must all remember that strong bodies must be balanced with strong characters, and works toward that end. Our positions as role models demand it." - Straight ally Ben Cohen, saying he's disappointed with Kobe Bryant.
Labels: Ben Cohen, Quote Of The Day, rugby, sports
reposted from Joe
Posted by oreydc at 5:49 PM No comments: Links to this post

Via JMG: The Verizon Guy Comes Out 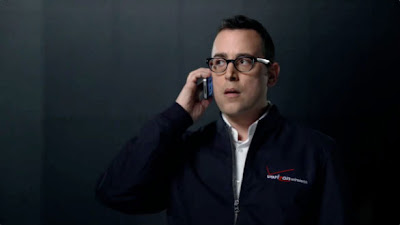 Now that the long run of Verizon's "Can You Hear Me Now?" campaign is over, actor Paul Marcarelli has come out and is talking about the anti-gay abuse he endured while playing the character known as Test Man.

Marcarelli has a home in Guilford, Connecticut, and five summers ago, kids in an SUV began driving past at night, yelling, “Can you hear me now?” Later, says Marcarelli, “they started screaming ‘faggot’ up at my house. It got progressively more profane as the years went by.” One night, it happened while some friends were over, and he decided to call the police. “As soon as I hung up the phone,” he says, “I realized that in order for them to do anything about it, it would have to become a report that would go into a police log.” Worried about the publicity—and the questions that might ensue if it came out that the actor playing Test Man was gay—he declined to file a report.

Marcarelli has produced and written a film titled The Green, which "centers on how a small town slowly turns against a gay couple when one of the men, a schoolteacher, gets ensnared in scandal." His movie is currently being pitched to film festivals.
Labels: acting, advertising, coming out, Verizon
reposted from Joe
Posted by oreydc at 5:46 PM No comments: Links to this post

Dan Savage says to religious bigots: "You've got to get over it"

Posted by oreydc at 7:53 AM No comments: Links to this post