The Gospel According to Betty (Part I)

Posted by oreydc at 10:19 PM No comments: Links to this post

Via JMG: US Sodomy Map 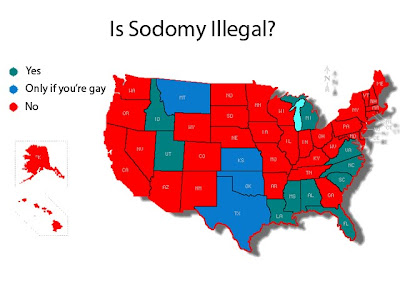 Despite Lawrence Vs. Texas, laws specifically against gay sex remain on the books in four states. Ten other states continue to outlaw all acts of sodomy. Last month the GOP blocked an attempt to delete such a law in Montana.


According to a press release from the Human Rights Campaign, the GOP's contract with the law firm hired to defend DOMA stipulates a maximum payment of $500,000. Oh, but it could be more.

In order to defend discrimination by any means necessary, House Republican leaders have contracted with the law firm King & Spalding at the rate of $520 an hour to argue that they’re right to deny recognition to legally married couples, according to the contract made public today. The document caps the cost at $500,000 but can easily be increased upon further negotiations with the firm. “DOMA inflicts a great cost on same-sex couples but now its defense is burdening taxpayers to the tune of $520 per hour,” said Human Rights Campaign President Joe Solmonese. “The firm of King & Spalding and their attorney Paul Clement should be ashamed at every penny earned in trying to justify discrimination against American families.” There are currently at least nine cases challenging the constitutionality of section 3 of DOMA which bars federal recognition of marriages between same-sex couples. If the House were to intervene in all nine that would mean less than 100 billable hours would be spent per case in order to hit the $500,000 cap.

Where are the jobs?
Labels: bigotry, DOMA, GOP, U.S. House
reposted from Joe
Posted by oreydc at 9:40 PM No comments: Links to this post