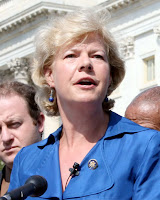 “This would obviously be a top priority for us. Tammy Baldwin has been an outstanding congresswoman, and she’d be an outstanding senator,” said Chuck Wolfe, president and CEO of the Gay & Lesbian Victory Fund, which has endorsed Baldwin repeatedly. In 1998, when Baldwin became the first openly LGBT candidate to win election to the U.S. Congress as a freshman, the Victory Fund raised nearly a quarter million dollars for her campaign.