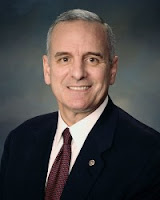 Even though he has no power to stop Minnesota's anti-gay marriage amendment from going on the 2012 ballot, Gov. Mark Dayton has symbolically vetoed the bill.

"I do not have the power to prevent this divisive and destructive constitutional amendment from appearing on the ballot, in November 2012, the Legislature sent it to me in the form of a bill," he wrote in a letter to legislative leaders. "Thus, symbolic as it my be, I am exercising my legal responsibility to either sign or veto it." He predicted the amendment will fail when it comes before Minnesotans. If that happens, Minnesota voters would be the first voters of dozens of states to reject a gay marriage ban. "The path of social progress, of human compassion and understanding, would be tragically reversed by this amendment. Minnesotans are better than this. I urge Minnesotans to reject this amendment," he wrote.

Hit the above link for a copy of Dayton's letter announcing the veto.
Labels: 2012 elections, marriage equality, Minnesota
reposted from Joe
Posted by oreydc at 7:04 PM No comments: Links to this post

PUSHING FOR AN AMBITIOUS ANTI-HOMOPHOBIA LAW IN BRAZIL

All Out has been working in support of an ambitious Anti-Homophobia law (PLC122) that would finally give ALL Brazilians equal protection under the law. Brazil has one of the highest rates of attacks and murders of LGBT people in the world. On May 17, the International Day Against Homophobia, our 100,000+ All Out / Avaaz petition was delivered to the Brazilian parliament and our efforts received tons of local press. Later that evening All Out organized a massive outdoor photo projection in Brasília, made up of hundreds of powerful messages of solidarity from our membership around the world. Check out some incredible photos from that event here

Posted by oreydc at 11:14 AM No comments: Links to this post

Via JMG: Photo Of The Day - SF AIDS Ribbon 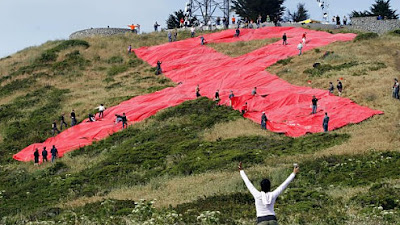 A giant AIDS ribbon has been installed on San Francisco's Twin Peaks in observance of the 30th anniversary of the epidemic. The ribbon, which can been seen for many miles, will remain on the hillside until it's replaced by the giant pink triangle which appears in that space every year on gay pride weekend.

Via JMG: Language Advice For Christianists


From the Desiring God site of Pastor John Piper:

Except in a sentence like this one, I don’t think we should use the term “gay marriage” or “same-sex marriage.” I think in our everyday discourse, we should say “so-called gay marriage” or “so-called same sex marriage.” I would encourage politicians, pastors, and people to adopt this simple habit. The reason is that in God’s eyes, there simply is no such thing as so-called “gay marriage.” It does not exist. It cannot be made to exist by desires or decisions or language or laws. God ordained marriage with the words: “A man shall leave his father and his mother and hold fast to his wife, and they shall become one flesh” (Genesis 2:24). Marriage is the union of a man and a woman in a lifelong covenant as husband and wife.

Going by Piper's logic, Newt Gingrich is on his third "so-called marriage."
Labels: Christianists, dumbassery, religion
reposted from Joe
Posted by oreydc at 10:57 AM No comments: Links to this post 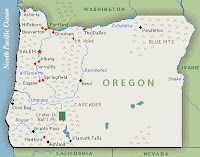 Portland, Oregon police are investigating a possible hate crime after two gay men were beaten after being seen walking hand-in-hand. One of the victims reports: "I left [the ER] with 9 stitches in my lips, two black eyes, a dislodged jaw, some loose teeth, severe swelling where they hit me on my cheek, and scrapes and bruises on my head."


Detectives say Brad Forkner and Christopher Rosevear were walking hand-in-hand Sunday evening in Waterfront Park and then headed over the Hawthorne Bridge. As the pair walked, police say, they noticed several men behind them who were talking, laughing and pointing, but they weren’t sure if it was directed at them. Police say the attack happened as Forkner and Rosevear walked from the bridge to the trail toward the East Bank Esplanade. The pair told officers the men pushed and punched Forkner before he managed to break away and call 911. Police say the attackers hit Rosevear in the head, face, back and ribs before running off. ”It’s too bad that people are still walking around a city like Portland feeling, well, actually unsafe,” says Paul Fukui, the operations manager of the Q-Center, which advocates for the gay, lesbian, bisexual and transgendered community.

According to the above-linked news story, several witnesses observed the attack but did nothing to help. The three assailants are described as white men in their 20s.

(Tipped by JMG reader Megan)
Labels: gay bashing, hate crimes, Oregon, Portland
reposted from Joe
Posted by oreydc at 10:50 AM No comments: Links to this post

Via AmericaBlog.gay: Odd quote of the day

From the Advocate, regarding Tennessee's hate law that repealed gay and trans protections in Nashville:


Human Rights Campaign president Joe Solmonese released the following statement: “Discrimination should have no place in the Volunteer State and the Chamber [of Commerce]’s opposition to this law sent a strong signal that corporations are on the leading edge of positive change. In contrast Governor Haslam has put discrimination ahead of the state’s values and even business interests by signing this horrible legislation.”

Corporations were also on the leading edge of making this entire thing happen. Their local representatives were responsible for this law, lobbied for this law via the local chamber of commerce, and then when we asked them for help killing it, most of them were cool to the idea at best.  As for the Chamber, it held its statement until 20 seconds - literally 20 seconds - before the governor signed the bill into law, making it utterly worthless.  Hardly a coincidence or a "strong signal."

Other than that Mrs. Lincoln...
Posted by oreydc at 10:46 AM No comments: Links to this post

The White House issued its "Statement of Administration Policy" (SAP) on H.R. 1540 – National Defense Authorization Act for FY 2012. You'll recall that some of the House homophobes added anti-gay language to that legislation. The House will be voting on the Defense bill this week. The White House has many problems with the House bill -- and does not approve of the anti-gay provisions. There's no veto threat, but there's an objection:

Attempts to Prevent, Delay, or Undermine the Repeal of "Don’t Ask, Don’t Tell": On December 22, 2010, President Obama signed into law the Don't Ask, Don't Tell Repeal Act of 2010, in order to strengthen our national security, enhance military readiness, and uphold the fundamental American principles of fairness and equality that warfighters defend around the world. As required by that statute, DoD is diligently working to prepare the necessary policies and regulations and conducting educational briefings to implement the repeal. Should it be determined, as required by the statute, that the implementation is consistent with the standards of military readiness and effectiveness, unit cohesion, and military recruiting and retention, then the President, the Secretary of Defense and the Chairman of the Joint Chiefs of Staff will send forward the required certification. The Administration strongly objects to any legislative attempts (such as section 533) to directly or indirectly undermine, prevent, or delay the implementation of the repeal, as such efforts create uncertainty for servicemembers and their families.

Military Regulations Regarding Marriage: The Administration strongly objects to sections 534 and 535, believes that section 3 of the so-called Defense of Marriage Act (DOMA) is discriminatory, and supports DOMA’s repeal.

Last year, the inclusion of DADT repeal language didn't merit a "Statement of Administration Policy." We got a letter.

So, we've made progress -- and it's clear that being pro-gay is the winning political position. The GOPers want to have this fight. Let's have it.

Posted by oreydc at 10:40 AM No comments: Links to this post

Via JMG: Focus on the Family thinks the bigots have lost the marriage battle


Jim Daly, the president of the massive religious-right organization Focus on the Family, concedes that his group has basically lost the argument on gay marriage in an interview with a Christian magazine.


We're winning the younger generation on abortion, at least in theory. What about same-sex marriage? We're losing on that one, especially among the 20- and 30-somethings: 65 to 70 percent of them favor same-sex marriage. I don't know if that's going to change with a little more age—demographers would say probably not. We've probably lost that. I don't want to be extremist here, but I think we need to start calculating where we are in the culture.

Well! Focus on the Family will still do everything in its power to force women to carry pregnancies to term against their wishes, but they have largely given up on forbidding loving couples from making legal commitments to one another for no reason other than an icky feeling supported by the bit of the book of Leviticus that also calls for people who insult their parents to be stoned to death. Progress!

Posted by oreydc at 10:35 AM No comments: Links to this post