Pop singer Miley Cyrus has been telling her one million Twitter followers to boycott Urban Outfitters because its CEO is a raving teabagger who contributed to Frothy Mix. Go Miley!
Labels: 2012 elections, Miley Cyrus, Rick Santorum, teabaggers, Tweet Of The Day, Urban Outfitters
reposted from Joe
Posted by oreydc at 6:19 PM No comments: Links to this post

Fmr. Lt. Dan Choi just texted me.  On Saturday, May 28 he was thrown to the ground and kicked by neo-Nazis and the Russian police for the simple "crime" of marching peacefully in Moscow's LGBT pride parade.  There's video of the entire thing, and it's horrific.

And the US government has said nothing.

Please sign Dan's open letter to Secretary of State Hillary Clinton asking her to condemn the anti-LGBT violence in Moscow, and to reaffirm the human rights of lesbians, gays, bisexual and transgender people in Russia and around the world.


The Russian government has banned "Pride" for years, in direct violation of a decision by the European Court of Human Rights.  And today they used violence against Russian and international human rights activists for peaceably exercising their rights to freedom of speech and freedom of association.

Dan Choi has agreed to personally deliver this open letter with all of your signatures to the State Department upon his return to Washington.  We can make a difference here, with your help.  Sign Dan's open letter to Secretary Clinton urging her to speak out against the violence in Moscow.

John Aravosis and Joe Sudbay @ AMERICAblog
Posted by oreydc at 6:07 PM No comments: Links to this post

Via AmericaBlogGay: Israeli PM Netanyahu mentioned gays in his address to Congress

I'd missed this from the other day:
So today the Middle East stands at a fateful crossroads. And like all of you, I pray that the peoples of the region choose the path less traveled, the path of liberty.

No one knows what this path consists of better than you. Nobody.

This path of liberty is not paved by elections alone. It’s paved when governments permit protests in town squares, when limits are placed on the powers of rulers, when judges are beholden to laws and not men, and when human rights cannot be crushed by tribal loyalties or mob rule.

Israel has always embraced this path in a Middle East that has long rejected it. In a region where women are stoned, gays are hanged, Christians are persecuted, Israel stands out. It is different.
Before anyone poo-poos this, he's the conservative leader of a government that panders to religious extremists. Yet he has no problem mentioning gays in an address to another government that is somewhat equivocal on, and even downright hostile to, gay rights. It's not nothing.
Posted by oreydc at 4:12 AM No comments: Links to this post

Via JMG: Another Gallup Poll 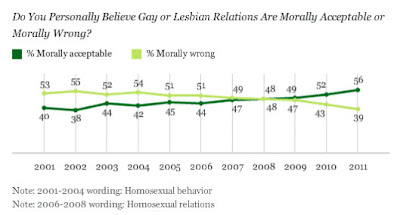 Labels: Gallup, LGBT rights, polls
reposted from Joe
Posted by oreydc at 4:06 AM No comments: Links to this post


Running in 2008, Barack Obama promised change from the George W. Bush administration and on so many issues, change is certainly what we got. From signature achievements like passage of the law to end "Don't Ask, Don't Tell" to administrative changes throughout government, President Obama has done more to improve the lives of LGBT people than any President in history.

Hit the link for HRC's exhaustive list of Obama's pro-gay accomplishments.
Labels: 2012 elections, Barack Obama, Democrats, HRC
reposted from Joe
Posted by oreydc at 3:59 AM No comments: Links to this post

Via JMG: Bloomberg's Speech On Marriage

Here's the full video of yesterday's pro-gay marriage speech by NYC Mayor Michael Bloomberg. As noted by Andy Humm, we've got some major issues with Bloomberg, but it IS a damn good speech.


Labels: marriage equality, Michael Bloomberg, NYC
reposted from Joe
Posted by oreydc at 3:58 AM No comments: Links to this post

Labels: education, LGBT rights, Nashville, Tennessee
reposted from Joe
Posted by oreydc at 3:56 AM No comments: Links to this post

Via JMG: Gallup: How Many Gays Are There?

Via JMG: Ken Mehlman: Why Republicans Should Support Same-Sex Marriage

Yeah, that's nice now. But don't ever for one minute forget Mehlman's leadership role in the many anti-gay marriage referendums that swept the nation during his tenure as head of the Republican National Committee.


Labels: GOP, homocons, Ken Mehlman, marriage equality
reposted from Joe
Posted by oreydc at 3:49 AM No comments: Links to this post