GLAAD tweeted back: "Language about stabbing kids for being gay isn't 'foul.' It's dangerous."
Labels: GLAAD, hate speech, language, tweet of the day
reposted from Joe
Posted by oreydc at 5:03 PM No comments: Links to this post 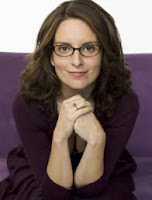 "The violent imagery of Tracy's rant was disturbing to me at a time when homophobic hate crimes continue to be a life-threatening issue for the GLBT Community. It also doesn't line up with the Tracy Morgan I know, who is not a hateful man and is generally much too sleepy and self-centered to ever hurt another person. I hope for his sake that Tracy's apology will be accepted as sincere by his gay and lesbian co-workers at 30 Rock, without whom Tracy would not have lines to say, clothes to wear, sets to stand on, scene partners to act with, or a printed-out paycheck from accounting to put in his pocket." - Tina Fey, in a statement released to TMZ.
Labels: 30 Rock, hate speech, language, Tina Fey
reposted from Joe
Posted by oreydc at 5:01 PM No comments: Links to this post

Kevin Rogers, guy who broke Tracy Morgan story on Facebook, had to come out to his mom today before going on CNN

Class act, this guy. Kevin Rogers. He's the guy who attended the Tracy Morgan stand up show and was so outraged by what happened, he wrote it up on Facebook, and it spread like wildfire. He got called by CNN today, to talk about what he saw. But first, he needed to come out to his mom. There's video of him being asked about this on CNN. It's heart-wrenching. He tears up. It starts at 6:16 in the video below. Adorable. And what a guy. I mean deciding to come out to your mom because you need to go on CNN in order to make a difference for your community. Damn.
make the jump here


A reader explains the problem with Tracy Morgan's apology

As apologies go, this one attempts to hit the right notes while avoiding being a non-apology. But I note the following:

No attempt to dispute the content of the reported remarks. That being the case, this apology is not sufficient given the depth of hatred, bordering on incitement, contained in those remarks.

He apologizes for his "choice of words". I'm left scratching my head, wondering what possible words could have made the ideas expressed funny, in any context. None come to mind.

Morgan states that he "went too far". This leads me to question why he went there at all.

So here's the message I'd like to get across to Tracy Morgan, and those who would emulate him:

The pain and suffering that so many gay men and lesbians have experienced at the hands of bullies and murderers is NOT a subject to be exploited for comedic purposes. We were not put on this earth for your entertainment. We will not be your punching bag, and we're not going to stand for being your punchline, either.

Sometimes saying that your sorry isn't enough. Sometimes even saying it and really meaning it is likewise insufficient.

Consider for a moment the case of Ken Mehlman - a gay man whose role in campaigns against legal marriage for same-sex couples has made it impossible for many in the LGBT communities to forgive him.

Tracy Morgan, in some ways what you've done may be even worse than Ken Mehlman's actions. You've advocated, through your "poor choice of words", the murder - MURDER - of a gay son. Granted, a hypothetical son, but it's exactly the kind of thing that contributes to an already hostile environment for persons of same-sex orientation; one in which real murders, beatings and other abuse happen far too often.

So don't think that you deserve to expect our forgiveness. You haven't begun to convince us of that.

via AmericaBlogGay: And I'd note that Ken Mehlman has actually DONE something to make up for it. He's raised a ton of money, and lobbied Republicans directly, for marriage equality.

He's in hot water, and his apology today is not being accepted by anyone.

The story needs to be put in context. Morgan made the anti-gay comments in Tennessee, where they're trying to ban the mention of gays by teachers in public schools, and they just repealed every municipal civil rights ordinance on the books, at the request of the religious right and the business community, both of whom were upset with Nashville's new gay and trans civil rights ordinance.  It's gone now.  And all this happened just a few weeks ago.

And Morgan has a history of gay-baiting in his stand-up routines (he said being gay was a "choice" in a previous routine), but that's nothing like what he did last Friday.

He reportedly said he'd stab his son to death if the boy turned out gay.

That was after he said that people are born gay, and he knows this because "God don't make no mistakes." Get it, we're mistakes.

He then took on the recent news on "bullying", and the fact that it's caused a number of gay teens to recently kill themselves. Apparently that's funny too. He told bullied kids to quit whining and stop being pussies.

That's when he added that he'd stab his gay son to death.

The audience ate it up with lots of "you go, Tracy!"

Posted by oreydc at 9:28 AM No comments: Links to this post