"Delegates, an investigation published in September 2010 by [the] LGBT news blog Slap Upside The Head revealed that Exodus Global Alliance, an ex-gay organisation, enjoys registered charity status with the Canada Revenue Agency. Ex-gay organisations claim that gay, lesbian, and bisexual people can be made straight. They take advantage of LGB people, often in vulnerable family situations or at grips with depression and self-hatred, and browbeat them—saying that LGB people never live happy lives, that we are unhealthy and unwhole, and that we never experience love and that the only hope lies in their therapies. [...] We see that they are selling snake oil with benefits given to them by the Canada Revenue Agency at present."

You can follow the campaign to revoke these groups' non-profit status on the blog Slap Upside The Head. We need to bring this movement here.
Labels: "ex-gay", Canada, liars, still totally gay
reposted from Joe
Posted by oreydc at 11:19 PM No comments: 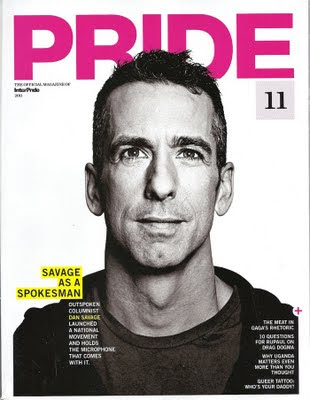 Make sure you pick up a copy of Pride 2011 when you head out for your local events this weekend. I was the guest editor this year and I wrote the cover story interview with Dan Savage. Brag!
Labels: Dan Savage, JMG, Pride Magazine
reposted from Joe
Posted by oreydc at 11:04 PM No comments:

Via Moveon.org: Remember When?

Most of the things that spread fast on Facebook are pretty silly—videos of cats and the like. But recently, we noticed a new contender: a feisty political point that's spreading like wildfire.
We think there's a real opportunity for it to go viral and introduce millions of people to this cheeky, spot-on reframing of the economic crisis we're in. Can you help make that happen? Click here to share this message on Facebook today:

If you didn't click on the link above, or on the image itself, you can click here to share this great message on Facebook: http://www.moveon.org/r?r=209557&id=28268-538505-UU%3DAdYx&t=4
And if you'd prefer to share this message via email instead, just forward this email to all your friends and family.
Thanks for all you do.
–Peter, Laura, Michael, Amy, and the rest of the team

P.S. Check out what MoveOn's Justin Ruben called "An Inconvenient Truth for our economy—on steroids," tomorrow night at 8:15 p.m. ET. It's equal parts tent revival, dance party, and gripping story about what's happened to our economy and how we can rebuild the American Dream, led by inspirational leader Van Jones and powered by MoveOn.org. Click here to RSVP and catch it online in HD: http://front.rebuildthedream.com/rsvp/?rc=adrsvp
Posted by oreydc at 1:30 PM No comments:

Via 365Gay News: Study finds half of college-educated gays in the closet at work

Almost half of college-educated gay Americans hide their sexual orientation at work despite company policies to extend protection and benefits to gay employees, according to a new study by The Center for Work-Life Policy.


The study said that 48 percent of gay workers are closeted – and about a third of those closeted workers are nevertheless out in their personal lives, causing them to a lead a “double-life.”  The result is that they “are more likely to report job-related stress and isolation than their peers and more likely to say they want to leave their current jobs,” said Yahoo News.

Most Fortune 500 companies prohibit discrimination based on sexual orientation and extend benefits to workers’ same-sex partners, but the study found that people aren’t always aware of these policies or what they mean.

It is also possible, the authors suggest, that some closeted employees may be responding to their environment.  Some straight co-workers (37 percent of women and 52 percent of men) say that they would prefer gay people to keep their personal lives private.

Only 21 states prohibit employers from discriminating against LGBT workers.

make the jump here to read the full article
Posted by oreydc at 9:23 AM No comments:

Via AmericaBlogGay: Did Obama nudge history, or did history nudge him?


The White House response is to plead for maneuvering room by arguing that Obama has played an important role in nudging history in the right direction on the issue. Whether this will be enough remains to be seen. It’s hard to imagine gays deserting him in significant numbers, though enthusiasm and fundraising could suffer. But it seems clear that the White House has settled on its approach to this problem.

I don't think the President has nudged history at all. Like most Democrats, he's far behind both history and the American public on our issues (Joe calls this "political homophobia"). The public was consistently at 70% to 80% in the polls with regards to repealing DADT, they have the same views on ENDA, and recent polls are finally showing a majority in favor of marriage equality.

Why is it then that we had to beat the bejeesus out of the President to get him to finally move on DADT, and to get him to simply stop defending DOMA (something he did far too late, giving the Republicans the chance to now defend it instead)?  He didn't bend the arc of history, we did.  The President, and the party, are far behind the arc of history when it comes to our civil rights.  And rather than attempting to bend it in the right direction, they seem to be doing all they can to run from it as fast as they can, while offering us a tantalizing platter of b-rate advances that should have all been done on the first day of the new administration.

Yes, the President has done some good things.  (Though much of it is standard stuff that doesn't really count as fierce advocacy (such as appointing a gay ambassador after Clinton and Bush already both did the same), or issuing a Pride proclamation and holding a cocktail party that routinely black lists any gay Democratic leader who has stood up to the President.)  But the good the President's done on our top three issues - DADT and DOMA repeal, and the passage of ENDA - has so far been marginal at best.

Once DADT is fully repealed - and sadly the administration is dragging its feet on that now too, while many of us fear a delay will only embolden the GOP to try to some legislative funny business in the fall - that will be a true feather in the President's cap.  But let's not forget that Barack Obama had the opportunity to do so much more, on gay rights, on health care reform, on the stimulus, on eliminating tax cuts, on the budget, on immigration, on civil liberties, and he didn't.  And the only reason he did as much as he did on gay rights, even though it wasn't enough, is because a great many of us in the Netroots took the arc of history and threw it in his face.
Posted by oreydc at 7:24 AM No comments:

The article is short, rather than try to excerpt it, just go over. It's great.

Posted by oreydc at 7:20 AM No comments:

Via AmericaBlogGay: Kerry Eleveld: What Will Obama Tell The Gays Under The Shadow Of Lady Liberty?

The pressure is building for Obama to Evolve Already.

Read all of Kerry's post. As usual, I can't really add much to Kerry's words:

Look, everyone knows this is a political calculation. President Obama was for marriage equality as a state senator in 1996 before he was against it as an aspiring presidential candidate in 2004 (the evolution of his positions are traced here). But as he heads into the 2012 election cycle, it’s becoming increasingly difficult for him to have it both ways on same-sex marriage – to carry the magic mantle of hope and change, to appeal to the better angels of our nature, while literally falling behind the trend lines on supporting something as fundamentally American as the expression of our liberty.

Here’s just a few notes on the shift in dynamics since the ‘08 election: Obama doesn’t have the cover of two competing Democratic candidates who also hold the same position of not supporting marriage equality; when he took office, only one state had legalized marriage and now five have plus the District of Columbia; a federal judge has ruled the crux of the Defense of Marriage Act unconstitutional and Obama himself has concurred; another federal judge ruled a California ballot measure stripping marital rights from gays unconstitutional; five major consecutive polls, including Gallup, have now found that a majority of Americans support the right of same-sex couples to marry; “don’t ask, don’t tell” has been repealed (but not lifted yet) and although GOP lawmakers are still waging the battles of yesteryear in Congress, the rest of America barely batted an eye.

Beyond a shadow of a doubt, all this adds up to one thing: Drama. But more importantly, it’s about people’s lives, who they are to the core of their being, the fact that their heart pounds just as truly as everyone else’s. It’s about a longing for leadership that adds up to something more than a cold political calculation for the next election cycle.

But if calculate we must, let’s face it, the next election – like every election – will be about the economy, not marriage equality. So why not come full circle and stake your claim on the right side of history, Mr. President?

Posted by oreydc at 7:19 AM No comments: