“I believe that gay couples deserve the same legal rights as every other couple in this country,” the president said at a fundraiser in Manhattan, his first geared specifically to the gay community. Coincidentally, the long-planned event occurred just as lawmakers in Albany were debating legislation that would make New York the sixth state to legalize gay marriage.

“Traditionally marriage has been decided by the states and right now I understand there’s a little debate going on here in New York,” the president said to laughter. He said New York’s lawmakers are “doing exactly what democracies are supposed to do.”

Debate on the measure continued into the night at the statehouse, and the outcome was uncertain.
As Obama spoke a handful of people shouted out “marriage!” And Obama said, “I heard you guys.”
Posted by oreydc at 9:50 PM No comments: Links to this post

Posted by oreydc at 9:34 PM No comments: Links to this post

Via JMG: Decisions Are Best Left To The States

Video and transcript via Igor Volsky at Think Progress:


Part of the reason that DOMA doesn’t make sense is that traditionally marriage has been decided by the states and right now, I understand there is a little debate going on here in New York about whether to join five other states and DC in allowing civil marriage for gay couples. And I want to say that under the leadership of Governor Cuomo, with the support of Democrats and Republicans, New York is doing exactly what democracies are supposed to to do. There is a debate, there is a deliberation about what it means here in New York to treat people fairly in the eyes of the law and that is — look, that’s the power of our democratic system.

Via JMG: Quote Of The Day - Anita Bryant

"I was before her time, but Sally Kern is here for such a time as this. I am grateful for her life and her friendship. Reading The Stoning of Sally Kern was at times like déjà vu, reminding me of my stand in Dade County in 1977. I can highly recommend this book to anyone who loves God, their family, and their country. It is a must-read for any believing woman or man who wants to make a difference in these perilous times. Those soldiers who have counted the cost of character assassination or endured other losses yet are willing to take a stand in truth and love for the glory of God, our children, and future generations will especially enjoy this inspiring book." - Anita Bryant, from a blurb on the cover of fellow homophobe Sally Kern's autobiography.
Labels: Anita Bryant, bigotry, books, homophobes, Quote Of The Day, religion, Sally Kern
reposted from Joe
Posted by oreydc at 9:26 PM No comments: Links to this post

Via JMG: Today In Albany , NY 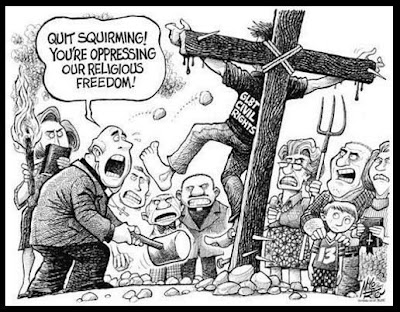 I'm fairly sure I first posted this cartoon here a couple of years ago, but it's being passed around on Twitter today and feels just as true as when it was first published.
Labels: Albany, bigotry, religion
reposted from Joe
Posted by oreydc at 9:11 PM No comments: Links to this post

It Gets Better: Target Team Members

Posted by oreydc at 8:57 PM No comments: Links to this post

"I'm surprised the health department has not come out against this because we are going to have an HIV epidemic if this passes. They (health department) are always complaining about tobacco and smoking, I'm surprised they didn't say anything about this. You don't see two male dogs sleeping in the same dog house together. It blows my mind to think of it." - Clinton County GOP legislator Sam Trombley, who has a big future in New York state Republican politics.
Labels: asshattery, douchnozzles, New York state
reposted from Joe
Posted by oreydc at 8:52 PM No comments: Links to this post

Posted by oreydc at 8:50 PM No comments: Links to this post 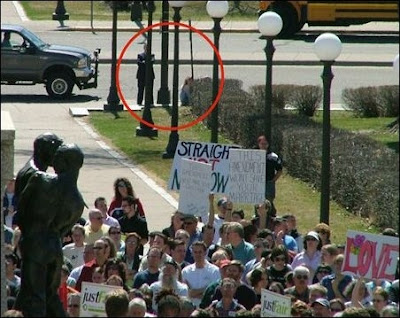 Buzzfeed reminds us of the incident in which then state legislator Michele Bachmann squatted down in some bushes to spy on an LGBT rights rally in Minneapolis. Bachmann later claimed she wasn't hiding, she was "resting her heels."
Labels: bigotry, crazy people, Michele Bachmann, Minneapolis
reposted from Joe
Posted by oreydc at 11:14 AM No comments: Links to this post

Via AmericaBlogGay: AC360: Is Obama’s opposition to marriage "real or just political posturing"

Great segment on AC360 last night, via Andy Towle. Anderson plays a clip of Obama's interview with Rick Warren back in August of 2008. In the wake of Prop. 8 and so many advancements, the answer that he opposes marriage because "God is in the mix" seems archaic. 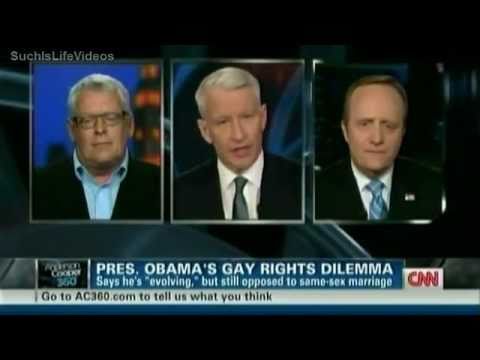 Let's be clear here: Supporting marriage would be a very good political move for the President. Public opinion is on our side and gets better every day. Conversely, he looks more and more out of touch on this issue every day.

Last year, the geniuses in the White House, led by then-Deputy Chief of Staff/now-Campaign Manager Jim Messina, concocted a plan to repeal DADT in 2011. When the Pentagon officials said it would complete its report on December 1, 2010 and wanted no legislation til the report was done, they weren't thinking lame duck. They were thinking 2011. But, a lot of us, including some great allies on Capitol Hill, pushed ahead. Now, repeal of DADT is touted as one of the Obama administration's great victories. I checked through some of the speeches Barack and Michelle Obama are giving at DNC fundraisers. Here are some recent excerpts:

We've made tremendous progress on a whole host of social issues, from ending "don't ask, don't tell" so that every American can serve their country regardless of who they love, to making sure that we've got equal pay for equal work, to making sure that we've got national service so that our young people can use their talents to help rebuild America.

We’re working to live up to our founding values of freedom and equality. And today, because this President ended Don’t Ask Don’t Tell, our troops will never again have to lie about who they are to serve the country they love.

It's a great applause line for them. And, we helped Obama and his team achieve that great victory -- against their wishes. Same can be said of marriage.

Every time I see another article where Messina claims the campaign is going after the youth vote, I wonder how'll they'll do that if Obama is opposed to marriage. For example, in Virginia (one of the 2012 battleground states and not a liberal bastion in any way), 73% of 18-29 year old voters support marriage. Not saying all young voters make their choice for President on marriage equality, but it could influence whether some of them actually vote. The current position of the President is dated and looks way out-of-touch -- and it doesn't inspire the base.

When Kerry Eleveld and I hosted Mike Signorile's show on May 3, 2011, one of our guests was Nate Silver who had just written a post titled, "Gay Marriage Opponents Now in Minority." He told us that Obama was already behind the trend of public opinion, "It's too late for [Obama] to get ahead of the trend." But, it's not too late for him to get on the right side of history.

Evolve already, Mr. President. It's the right thing to do on so many levels, including politically.

Now, if only the donors attending the big LGBT fundraiser in NYC tomorrow would convey the same message.....

Posted by oreydc at 8:43 AM No comments: Links to this post

1. GLAAD writes to FCC over Net Neutrality on January 4, 2010, notes how important the Internet is to gay advocacy. (It's the second letter via the link.)

2. NGLTF writes to FCC over Net Neutrality on January 5, 2010, notes how important the Internet is to gay advocacy.

That's not a coincidence.
Posted by oreydc at 8:41 AM No comments: Links to this post