Many obstacles still lie ahead for supporters of same-sex marriage, and eventually they will need Congress or the Supreme Court to embrace their goal. For the moment, though, they are jubilantly channeling the lyrics of "New York, New York."
Posted by oreydc at 10:26 PM No comments: Links to this post

Via AmericaBlogGay: Victory in New York!!! Marriage passed in the State Senate tonight: 33 - 29

Also, NOM Is in major meltdown mode. Alvin McEwen reports they're comparing their loss in New York to the betrayal of Jesus. Blasphemers.
___________________
UPDATE: Watch Governor Cuomo discuss this great win (11:15 PM ET): The Governor's presser is over, so I removed the embed. He was very eloquent and did say that he'd sign the bill tonight, so it takes effect in 30 days. Check out the photos and video from Stonewall at the bottom of the post.
____________________
The State Senate just approved the marriage equality legislation by a vote of 33 - 29. Same-sex marriage becomes legal in New York 30 days after Governor Cuomo signs the bill into law.

We've all been on the losing side too many times. Winning is way, way, way more fun.

The trend line is moving in the right direction. This was a huge step forward. HUGE!

Congrats -- and thanks -- to all those who made it happen.

The arc of moral justice is long, but tonight in Albany, it bent a little more towards justice.

UPDATE: Here's the statement from our friend -- and a hero of the marriage debate, Danny O'Donnell:


"Thomas Jefferson once wrote, “our civil rights have no dependence on our religious opinions.” Today, the New York State Legislature has affirmed the truth of that fundamental principle with the passage of the Marriage Equality Act."

"This day is a momentous one, not only for the thousands of same-sex couples across our state who find themselves suddenly on the cusp equality, now awaiting only one person's signature before being able to marry, but for all New Yorkers who have recognized and fought against legalized discrimination. I have been with my partner John for over 30 years, and, at long last, the state where we were both born, raised, and have lived our adult lives has agreed that all New Yorkers deserve Marriage Equality in the eyes of the law."

"Speaker Silver and my courageous colleagues in the Assembly who have staunchly supported this bill since 2007, when we became only the third legislative body nationwide to approve same-sex marriage without a court order, deserve immense praise for their continued and repeated votes for Marriage Equality. The State Senators who possessed the courage and conviction today to vote for my equality receive my profound thanks for taking this bold step forward. And, Governor Cuomo, who has been a resolute and powerful ally in this fight since long before the beginning of his term this past January, cannot be thanked enough for his continued support in this battle for justice."

"I am proud to have played a central role in this crucial moment for our state. Once Marriage Equality is signed into law, our state will be the most populous in the entire nation with these rights. I hope that with this prominence, our great state will shine as a beacon of equality and lead other states from the darkness of injustice. I will never forget this day."

UPDATE: tonight, New Yorkers are gathering in front of the Stonewall Inn to celebrate a victory that seemed inconceivable just a couple years ago. Paul Yandura sent some photos. 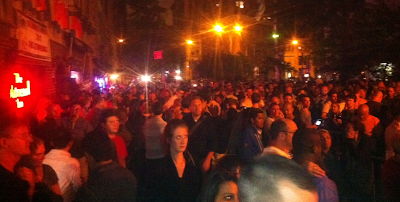 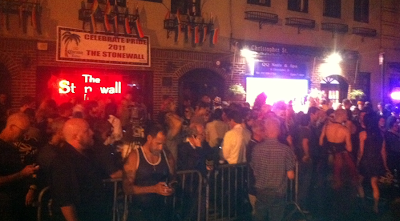 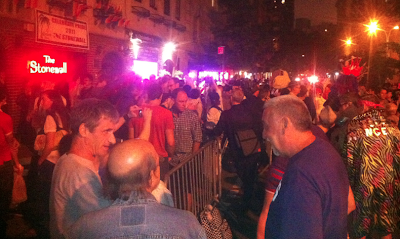 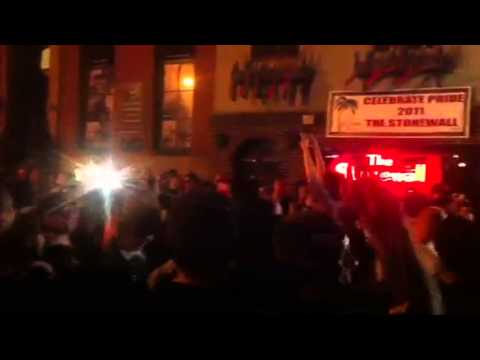 Posted by oreydc at 8:03 AM No comments: Links to this post

Posted by oreydc at 7:57 AM No comments: Links to this post

Dear Daniel,
The hopes and dreams of millions just came true: Marriage equality is about to become the law of the land in New York.
Just now, in a bipartisan vote, the New York State Senate approved a bill granting same-sex couples the same rights and responsibilities of marriage as everyone else. It'll soon go to Governor Cuomo – a stalwart champion of marriage equality – for his signature.
This was no easy victory. In 2009, right-wing groups helped derail marriage equality at the last minute. And just a few weeks ago, the extremist National Organization for Marriage (NOM) committed $1.5 million to stop us from passing this law. But you helped prove once again that with commitment, dedication, and the will to fight, anything is possible.
Here's how your support has helped make this win possible:
Here's another way to see the impact we've had together:
Soon, New Yorkers young and old will be able to marry whomever they choose. Loving, committed couples will be recognized by law. And the cause of equality will have advanced yet again, in one of our nation's largest states. New York joins just five other states and the District of Columbia in allowing same-sex couples to marry.
But this isn't just a victory for New Yorkers – it's a victory for supporters of equality nationwide. It brings us closer to the day when fair treatment is not just a hope or an aspiration, but a reality.
Daniel, you and I both know we won't win every fight along the way. But even the most heartbreaking losses are only temporary detours on the path to full equality. When we stand together, fight smart, and refuse to give up on a dream, we will get there in the end – just as we have in New York.
Thank you for all that you have done, and will do, to continue winning the civil rights battle of our generation.
Sincerely,

Joe Solmonese
President
P.S. To join the thousands of people on HRC's Mobile Action Network who are among the first to hear about exciting victories like these, text MAP4NY to 30644. We'll text you instructions on how you can add a note to our map of support for New Yorkers.

Posted by oreydc at 12:30 AM No comments: Links to this post

Posted by oreydc at 12:25 AM No comments: Links to this post 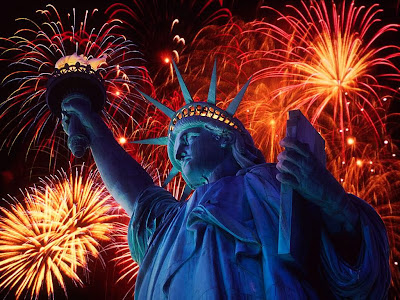 I love you, New York.

Now please excuse me as I slip away for some heavy drinking. Marriage equality in New York has been one of the top focuses of this here website thingy for a long, long time.
Labels: Andrew Cuomo, celebration, Daniel O'Donnell, LGBT History, marriage equality, New York state, NY Senate, Thomas Duane
reposted from Joe
Posted by oreydc at 12:19 AM No comments: Links to this post

“Love and fairness wins the day for all New Yorkers and our families. Today is a historic day and a victory for equality and justice – it is the culmination of many years of work by the Pride Agenda and others across the state,” said Ross D. Levi, Executive Director of the Empire State Pride Agenda. “We are thrilled that finally all loving, committed New Yorkers will be able to make the commitment of marriage here in the Empire State.”

"There are rare moments when the historical significance of an action speaks for itself and words can’t capture the magnitude. This is one such moment. Lesbian, Gay, Bisexual and Transgendered (LGBT) New Yorkers will no longer be denied the right to marry the ones they love. For the first time in New York’s rich history they will be granted equal protection under the law. I want to commend the incredible leadership and passion of Governor Andrew Cuomo who made good on his promise to make Marriage Equality the law in New York State. I also want to thank my colleagues in the State Senate on both sides of the aisle, and in the Assembly, who took a courageous stand when it would have been far easier for them to turn away from what I know for many was a difficult issue."

"Thomas Jefferson once wrote, 'our civil rights have no dependence on our religious opinions.' Today, the New York State Legislature has affirmed the truth of that fundamental principle with the passage of the Marriage Equality Act. I am proud to have played a central role in this crucial moment for our state. Once Marriage Equality is signed into law, our state will be the most populous in the entire nation with these rights. I hope that with this prominence, our great state will shine as a beacon of equality and lead other states from the darkness of injustice. I will never forget this day."

"Winning the freedom to marry in New York truly is a transformative moment for committed couples and for our country, a triumph for love and equality under the law,” said Evan Wolfson, founder and President of Freedom to Marry. “Now that we’ve made it here, we’ll make it everywhere – and as Americans’ hearts open and minds continue to change in favor of the freedom to marry, the momentum coming from New York’s giant step forward brings a nationwide end to marriage discrimination closer than ever.”

“New Yorkers have plenty to celebrate this Pride Month. There’s no doubt that today will be revered as a major turning point in civil rights history. A bipartisan group of legislators have affirmed that equal rights for every citizen is not a partisan issue, but an American value. Yet for millions of Americans who do not live in New York, Washington DC, or the five other states that have recognized the constitutional rights of gay and lesbian Americans, they are still suffering the injustice of discrimination every day. The freedom to marry is a constitutional liberty and the birthright of every American. Constitutional rights belong to every individual, regardless of the state you inhabit. This has recently been affirmed within the past year by federal courts in our nation’s most prominent civil rights cases."