A Message of Hope from the United States Senate

Posted by oreydc at 10:15 PM No comments: Links to this post

Posted by oreydc at 10:10 PM No comments: Links to this post

Posted by oreydc at 10:00 PM No comments: Links to this post 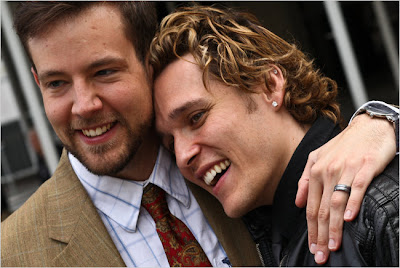 In what the New York Times says may be a precedent-setting decision, the federal government has dropped its deportation case against a gay Venezuelan legally married to an American man.

The announcement comes as immigration officials put into effect new, more flexible guidelines governing the deferral and cancellation of deportations, particularly for immigrants with no serious criminal records. Immigration lawyers and gay rights advocates said the decision represented a significant shift in policy and could open the door to the cancellation of deportations for other immigrants in same-sex marriages. “This action shows that the government has not only the power but the inclination to do the right thing when it comes to protecting certain vulnerable populations from deportation,” said the couple’s lawyer, Lavi Soloway. The case has been closely watched across the country by lawyers and advocates who viewed it as a test of the federal government’s position on the Defense of Marriage Act, a federal law that bars the federal government from recognizing same-sex marriages.

With a presidential campaign that promises to be closer and more contentious than the one that got him elected four years ago, Mr. Obama and his team might be reluctant to embrace a controversial social issue when the economy and jobs are of paramount importance to voters. At some point, though, doing the right thing must trump politics. If Mr. Obama does come out in favor of gay marriage, his base would surely rally around him.

And all supporters of gay rights should be girding themselves for battle with those who would use the president’s position to deny him a second term. The first question at the news conference was about Republican recalcitrance on tax increases. “Hopefully leaders at a certain point rise to the occasion and do the right thing for the American people,” Mr. Obama said. Later, he would say, “If you know you have to do something, you just do it.” The same words apply to him on marriage equality. So just do it already.

"The mistake that straight people made was imposing the monogamous expectation on men. Men were never expected to be monogamous. Men had concubines, mistresses and access to prostitutes, until everybody decided marriage had to be egalitar­ian and fairsey. [Rather than granting women] the same latitude and license and pressure-release valve that men had always enjoyed, we extended to men the confines women had always endured. And it’s been a disaster for marriage." - Dan Savage, quoted in an extensive NYT Magazine article on fidelity.
Labels: Dan Savage, marriage equality, monogamy, New York state
reposted from Joe
Posted by oreydc at 9:38 PM No comments: Links to this post 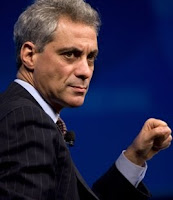 "I would hope that the state would move in that direction," Emanuel said in the interview that aired Wednesday. "Tremendous progress has been made across the country on a value statement and I think that's very important." Emanuel declined to comment on Obama's stance on the issue, but noted that the president has signed into law legislation that recognizes hate crimes based on sexual orientation and a repeal of the "don't ask, don't tell" policy that prevented gay men and lesbians from serving openly in the military.

JustaBahai: Flexibility in Bahai Law in relation to homosexuality

Flexibility in Bahai Law in relation to homosexuality

The following is a response to a thread on the Bahai Planet forum called “AIDS Faith conference” where the intitial poster was curious to know if there had been any Bahai statements on AIDS and the loss of life due to this. The discussion quickly turned to the rights and wrongs of homosexuality. I stepped later on in the discussion and the following is one of my posts.


make the jump here to read the full posting on justabahai
Posted by oreydc at 3:47 PM No comments: Links to this post

UPDATE: Politico's Julie Mason was providing the pool coverage of the reception, and she got a chance to talk to Dan Savage (and noted our pin):


Dan Savage, a columnist, author and gay activist was there with his husband (they married in Canada), Terry Miller. Dan was wearing a black and white plaid shirt with a small button that said, "evolve already." Terry wore a white shirt with a hot pink bow tie.

"I believe the president should evolve," Savage said. "He says he's evolving, I believe him." He added, "I want to hurry him along."

Dan Savage was invited to the LGBT Stonewall reception at the White House today with the President, and true to form, was sporting a pin saying "evolve already."  Joe and I just had the pins made last night, based on our "evolve already" campaign, calling on the President to evolve on the gay marriage issue back to where he was in 1996, namely in favor of it. 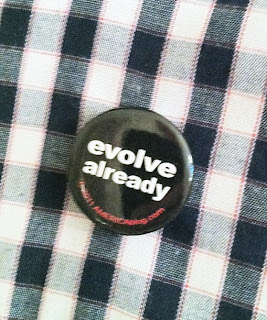 You can find more "evolve already" gear at the AMERICAblog shop hosted by Don't Panic.
Posted by oreydc at 9:27 AM No comments: Links to this post