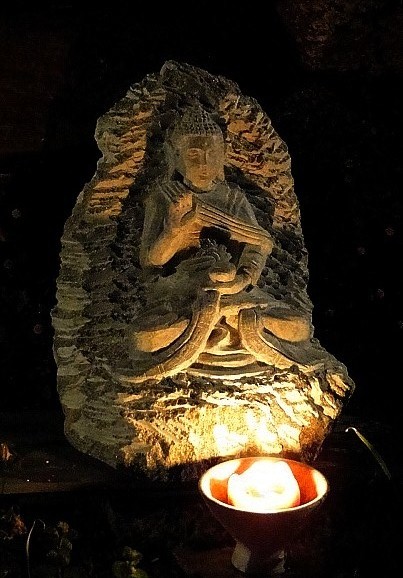 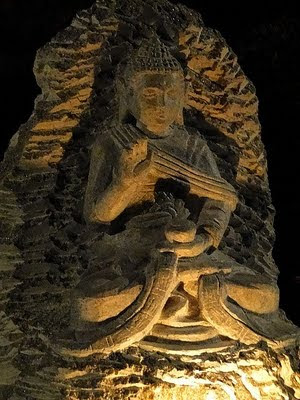 Asked a guy in the feira de pedra sabão to make me a Buddha from a bronze one I have from Nepal... it turned out grand...
Posted by oreydc at 7:48 PM No comments: Links to this post 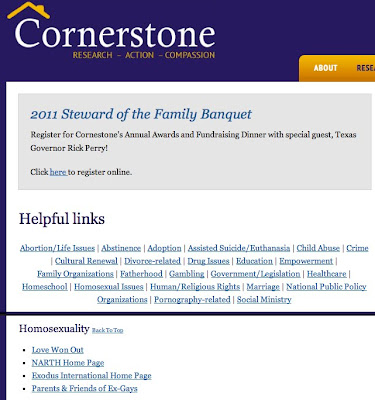 Good As You alerts us that in late October, Texas Gov. Rick Perry will attend the "Steward Of The Family" awards dinner held by New Hampshire's anti-gay Cornerstone Policy Group, which as you can see from the bottom of the above image are promoters of all the major "ex-gay' brainwashing and torture groups. Jeremy Hooper observes: "This is not a minor thing. This is a major GOP star lending credence to a leading state group who quite literally wants to not just stop LGBT people's civil rights, but to also stop human beings from living their truths. If it sounds absurd, it's because it is. But it's also now a part of the 2012 campaign season."

Today's WTF is Wrong with people:

Bilerico reports that an Indiana coroner cited DOMA in his refusal to release the body of Christina Santiago to her lesbian partner. Santiago was one of five killed at Saturday's stage collapse at the stage fair.

The Marion County coroner's office is refusing to release Santiago's body to her partner; the office cited the Defense of Marriage Act as the reason why they've turned down Brennon's request to pick up her loved one's remains. DOMA allows states to refuse to recognize same-sex marriages performed in other states. Indiana has its own version of DOMA that outlaws same-sex marriage. Since Indiana law requires the next-of-kin to pick up Santiago's body, but the state won't recognize Brennon as the surviving spouse, Santiago's body is still laying in the morgue awaiting a solution. It's unclear whether or not Santiago has other family available to claim her corpse and take it home for burial.

Santiago's partner was herself injured in the incident.
Labels: cruelty, DOMA, Indiana, tragedy
reposted from Joe
Posted by oreydc at 6:24 PM No comments: Links to this post Professor Blumenfeld (left) with Marcus Bachmann during happier times, just before their fiery exchange.  Marcus told Fred to “go ahead and record this,” and then proceeded to deny ever calling gays and lesbians “barbarians” and said that his two clinics and 27 counselors do not practice any type of “reparative therapy” even though there is ample evidence to the contrary on both his claims.
CLICK HERE.

THIS IS MUST WATCH TV!!!
Posted by oreydc at 6:10 PM No comments: Links to this post

FEC Complaint Against Fox News in the Works

Hope you can take time to read this in-depth story by veteran L A Times political reporter, Mark Z. Barabak.  It created quite a buzz in Iowa on the eve of last week’s debate, and has been reprinted all over the world:  CLICK HERE FOR STORY

The longtime political advisor knows he stands no chance of becoming the Republican nominee, but he wants to let other homosexuals know it's OK to be gay and to aim high in life.


Fred Karger, Republican candidate for president, knows there is no chance he will be the GOP nominee, much less the next leader of the free world. "I'm not delusional," he says, though one might wonder what, exactly, he is thinking. Posted by oreydc at 6:09 PM No comments: Links to this post

Via AmericablogGay: Bachmann squirms on the gay

Joe posted yesterday a video of GOP presidential candidate and Tea Party leader Michele Bachmann being quizzed on Meet the Press about her stance on gay issues.  Bachmann is rather anti-gay, to put it lightly, but yesterday she did everything she could to distance herself from the gay issue.  She didn't go back on her previous words, but still, note in the video how she downright squirms over David Gregory's questioning.  She even seems to suggest that she'd be okay having openly gay appointees in her administration, including openly gay judges.

Now, that's just bs.  There's no way Michele Bachmann is going to appoint an openly gay Supreme Court justice.  But it interesting that even Michele Bachmann, the darling of the religious right, feels the need to tone it down on the gay.  It doesn't mean she's going to change her anti-gay policies, but it is evidence that even the far right realizes that being perceived as anti-gay is no longer to even their political advantage.  And that's interesting.
Posted by oreydc at 7:24 AM No comments: Links to this post

We mentioned in an earlier post that Michele Bachmann was jabbering about reinstating DADT if she became President. She could do it by using her Executive Authority.
The NYT's Jim Dao talked to SLDN"s Aubrey Sarvis about this:
Congress merely laid out a process under which the ban could be lifted. Under that process, the president, Secretary of Defense and Chairman of the Joint Chiefs of Staff had to certify that repeal would not undermine recruiting, retention, morale and other indicators of what is commonly called military readiness.
Once that certification was made and sent to Congress, the secretary of defense then had to prepare and issue new regulations allowing gays and lesbians to serve openly. That is where the process is now: the regulations are being written and the ban will be lifted on Sept. 20.
But because Congress did not require the military to allow open service, a new president could order his or her new secretary of defense to issue new regulations that effectively reinstate the ban, said Aubrey Sarvis, executive director of the Servicemembers Legal Defense Network, which advocates for gay and lesbian troops.
Mr. Sarvis said that if a Republican president were to take that path, it would essentially return the military to the pre-don’t ask era, when gays were banned under regulation. In those years, which date back at least to World War II, he said, there were no federal statutes expressly prohibiting openly gay people from serving. It wasn’t until President Clinton pushed to reverse those regulations that Congress enacted don’t ask, don’t tell in the 1990s, statutorily prohibiting open service.
Aubrey thinks it would be difficult for a new President to implement a new ban on open service "because senior military leaders prefer continuity in policy and would not have much appetite for reversing course so quickly." It would sure fly in the face of public opinion, too. But, the when the haters get to hating on the gays, not much stops them.
Republicans are unabashed about using power when they have it. Yet, our side has to beg, scream and plead the Obama administration to use its power -- and they still won't. How many of the those executive actions laid out by the Task Force's New Beginnings Initiative have been implemented? Not many.
Posted by oreydc at 7:22 AM No comments: Links to this post

A clarification from Basic Rights Oregon:
Statement from Jeana Frazzini, Executive Director of Basic Rights Oregon:
An article by the Salem Statesman Journal inadvertently implied that Basic Rights Oregon has already decided to gather signatures for a 2012 ballot measure, while in fact we do not expect to make this decision until later this year. In the meantime, we continue our work to educate the public about why civil marriage matters to caring and committed same-sex couples. Last year, we launched this education campaign to engage Oregonians in conversations in person, on social media and on TV. To get involved in this effort, visit us at www.lovecommitmentmarriage.org.
I saw that report earlier and it seemed premature. I've only heard good things about the way Basic Rights Oregon is undertaking its deliberations. The advocates are not rushing into this. They're thinking it through very carefully and very strategically.
Posted by oreydc at 7:20 AM No comments: Links to this post