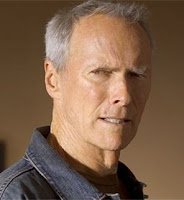 "These people who are making a big deal about gay marriage? I don’t give a fuck about who wants to get married to anybody else! Why not?! We’re making a big deal out of things we shouldn’t be making a deal out of. Just give everybody the chance to have the life they want." - Clint Eastwood, speaking to GQ Magazine.
Labels: Friendly Voices, Hollywood, marriage equality
reposted from Joe
Posted by oreydc at 9:40 PM No comments: Links to this post

In the below clip, Peter Sprigg and Bryan Fischer distort the example of a bisexual woman who wrote "I choose to be gay" in a blog post. Which is their victorious proof that millions and millions of people are collaborating in the lie that they are born gay. And even though Sprigg allows that people are "born with same-sex attraction," both he and Fischer have previously advocated for the criminalization of homosexuality. They are NOT hate groups! They just want you imprisoned, tortured, brainwashed, or dead.

RELATED: All the major GOP candidates will appear at the FRC's Values Voters Summit later this year. Apparently they have ZERO problem speaking before a group whose president has ties to the KKK and white supremacist groups.


Imagine that happening in the - a Republican president endorsing the creation of a gay rights group. It's distressing to see ways in which our "we're number one!" nation is awfully backwards.BBC:

David Cameron, Nick Clegg and Ed Miliband have given their backing to a new organisation which aims to promote gay rights around the world.


Kaleidoscope will campaign against homophobic prejudice and violence, particularly in Africa and the , where punishments for homosexuality can be severe.
The prime minister said such treatment was "simply appalling".
Posted by oreydc at 9:52 AM No comments: Links to this post

Via AmericaBlogGay: More on the anti-bullying lawsuit in Michele Bachman’s district


This is a good template for how to respond to other anti-gay school districts around the country. NYT:

After years of harsh conflict between advocates for gay students and Christian conservatives, the issue was already highly charged here. Then in July, six students brought a lawsuit contending that school officials have failed to stop relentless antigay bullying and that a district policy requiring teachers to remain “neutral” on issues of sexual orientation has fostered oppressive silence and a corrosive stigma.


Also this summer, parents and students here learned that the federal Department of Justice was deep into a civil rights investigation into complaints about unchecked harassment of gay students in the district. The inquiry is still under way.
Through it all, conservative Christian groups have demanded that the schools avoid any descriptions of homosexuality or same-sex marriage as normal, warning against any surrender to what they say is the “homosexual agenda” of recruiting youngsters to an “unhealthy and abnormal lifestyle.”
Adding an extra incendiary element, the school district has suffered eight student suicides in the last two years, leading state officials to declare a “suicide contagion.” Whether antigay bullying contributed to any of these deaths is sharply disputed; some friends and teachers say four of the students were struggling with issues of sexual identity.
Posted by oreydc at 9:50 AM No comments: Links to this post