Via JMG: Married After 58 Years 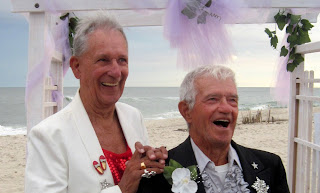 Televangelist John Hagee, who preached from the stage at Rick Perry's Christ-A-Thon, is probably most famous for his claim that God sent Hurricane Katrina because of wicked homosexuals. He's also called for a preemptive nuclear strike on Iran.


reposted from Joe
Posted by oreydc at 5:30 PM No comments: Links to this post

Kristin Chenoweth dropped a gay bombshell on Tulsa, Oklahoma by appearing on Piers Morgan and announcing support for LGBT Americans.
"I am a Christian, and I would call myself conservative in some ways and not so conservative in some ways," she told Morgan, which was reported on piersmorgan.blogs.cnn.com
"And I don't think the gay issue is a political one, but I do think it's a civil rights issue," she said. "I believe as a woman, as a Christian, as an actor and as an artist that people who love each other should be allowed to be married, and I know that doesn't go along with what Mrs. Bachmann and everybody that proclaims that, but that is why I believe," the Tony and Emmy award winner told Morgan on the show.
She also told him: "If it was a sin to be short, what would I do? Well I'd be right on the hell bus ... I believe that's the way God made me, and I don't believe God makes mistakes, and that includes a person's sexuality."
One of the reasons this particular interview makes so much difference is that Kristin Chenoweth hails from a very conservative Tulsa suburb, Broken Arrow, Oklahoma.
I'm a firm believer that any kind of activism by celebrities that forces people to challenge their ultra-fundamentalist beliefs in the conservative areas of our nation, like Broken Arrow, is a very good thing. Those areas are overrun with backwards, hateful Michele Bachmann types, and should be ground zero for positive change. Kristin Chenoweth's statement makes her a heroine for our community, and especially the young LGBT kids who struggle to survive in an environment that can be downright dangerous for them.
Be sure and read the comments below the story in the Tulsa World.
Posted by oreydc at 10:31 AM No comments: Links to this post

NYT:
The one thing he hasn’t done yet — and the lacuna grows more obvious and awkward with each show — is talk about his love life. It’s hard to see how he can continue to leave that out selectively and preserve one particular zone of privacy while building a confessional talk show wrapped around his good looks, high spirits and glamorous adventures.
Gossip magazines like Us and People, and Web sites like TMZ.com follow his exploits, but he has so far managed to avoid mainstream prying. As he put it in a 2007 interview, “The whole thing about being a reporter is that you’re supposed to be an observer and to be able to adapt with any group you’re in, and I don’t want to do anything that threatens that.”
The whole thing about being a talk show host is that you stop observing and make a spectacle of yourself, and that usually entails losing control over what you disclose and what you hold back. “Anderson” raises the question of whether Anderson is quite ready for that, and its success may hinge on the answer.
I've defended Anderson in the past. He's done good work for the community on his show, and never commits hypocrisy. Sure, it'd be nice for him to come out, but I understood his desire not to, and respected it. I think what the Times is getting at is the fact that it was once a secret, but not any longer. At this point, it's almost interfering with his show(s): knowing the truth, but knowing that it must not be spoken.
I'm still not terribly worked up over this subject, but if the Times is writing about it publicly, then perhaps it's time to just get it out of the way.
Posted by oreydc at 10:27 AM No comments: Links to this post