Via JMG: Britain To Cut Aid To Anti-Gay Nations


In a move many would like to see the United States make, the British government has announced that it will reduce financial aid to nations that persecute their LGBT citizens.

Poor African countries which persecute homosexuals will have their aid slashed by the Government in a bid by David Cameron to take his gay rights crusade to the Third World. International Development Secretary Andrew Mitchell has already cut aid to Malawi by £19 million after two gay men were sentenced to 14 years hard labour. And he has warned the country's leaders to scrap plans to introduce draconian new anti-lesbian laws. Mr Mitchell, one of Mr Cameron's closest allies, is also threatening to impose further aid 'fines' against Uganda and Ghana for hardline anti-gay and lesbian measures. The policy was disclosed after Mr Cameron defended his decision to legalise gay weddings when he addressed last week's Conservative Party conference.

The Daily Mail accompanied their above-linked story with a graphic noting that countries who commit other (non-gay) human rights abuses will continue to receive British assistance. 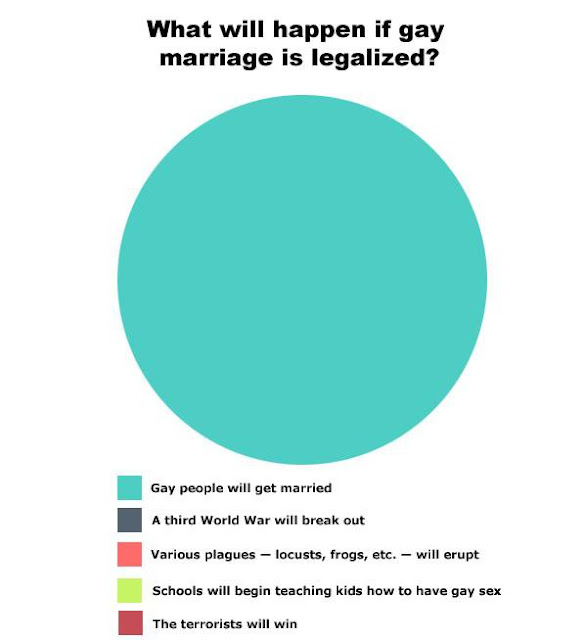 Posted by oreydc at 8:44 AM No comments:

Via JMG: Frothy: Gay Rights Are Not Civil Rights

RELATED: Frothy Mix unexpectedly finished a relatively strong third in yesterday's Values Voters Summit straw poll, a survey you won't hear much about because Tony Perkins is super-pissed that 600 Ron Paulians beamed down from their flying saucers to vote on Saturday morning and then immediately left the convention center.

Labels: DADT, GOP, Rick Santorum, Santorum
reposted from Joe
Posted by oreydc at 8:06 AM No comments:

Via AmericaBlogGay: Santorum: Studies show gays aren’t like blacks (uh, no they don’t)

Actually, there's no such thing as a study showing that gays aren't like blacks. Santorum, as usual, can't string together a coherent thought.
As for his assertion that banning gays in the military is somehow different than banning blacks, again, Santorum's argument succumbs to his weak intellect. The issue isn't whether being gay is genetic just like race is genetic (though the prevailing science is that genes play a role in sexual orientation), the issue is whether prejudice hurts morale and cohesion in the armed forces, and if it does, then why is Santorum in favor of racially integrating the military?
And Santorum's argument, namely that prejudice does hurt morale and cohesion, is justification for excluding minorities from the military as well. Was it no less a "social experiment" when Truman integrated the armed forces? Does anyone honestly believe that white racists experienced immediatelyl improved unit cohesion when a minority was included in their unit? Doubtful. They were probably pretty ticked off and didn't want to work with the new guy in their unit (the very definition of "harm to morale and cohesion"). But over time everyone learned to live and work together, and they realized their prejudices were wrong.
Finally, as for Rick Santorum's explanation as to why you can't compare racial prejudice and bigotry against gays, Coretta Scott King said you can and should compare the two. And I think she knew a little more about civil rights than a guy whose name means something not safe for work.
Posted by oreydc at 7:19 AM No comments:

Logo’s gay GOP star makes, then seems to retract, hate crime claim
Joe.My.God smelled trouble from the beginning, and it's looking like he was right.  A gay Republican, who is a star of an upcoming Logo TV show, claimed that liberal gay activists threw a brick through his window in response to his having lunch with Ann Coulter.  Now all of a sudden, he's deleted any reference to this claim.  The new Huffington Post gay-oriented vertical sadly published this story, but to their credit they did publish an update informing people that the story now looks to be a fake.  Unfortunately, their update is at the bottom of the story so everyone reading the story in the future will still think it's true unless they make their way all the way to the end.
I'm more concerned about Logo.  It's not terribly clear how Logo avoids the appearance of treating hate crimes as a joke if they go ahead with this show.  It's a rather serious situation making a false allegation of a crime.  But it's especially serious when we're talking about hate crimes.  The anti-gay bigots would like nothing better than to undermine the validity of real hate crimes by pointing to Logo's pretend hate crime.
And it gets worse.  Joe Jervis also reports that an executive producer at Logo helped promote the possibly-now-faked hate crime charge, and even congratulated the guy who made the charge.  So Logo owns this 100%.
Logo, however, is refusing to respond to Joe's questions about what the heck is going on over there.
Not smart.
If this guy lied, and Logo goes ahead with making him a star, then we may have our first boycott of a gay TV network by gays themselves.  You don't freaking joke about hate crimes against gay people, and you don't reward people who do.
Posted by oreydc at 7:17 AM No comments: