Via JMG: Linda Harvey: I Should Sue Wayne Besen

Linda Harvey is threatening to sue Wayne Besen for a post published yesterday on Truth Wins Out. In the post, Besen notes that Harvey has endorsed Uganda's still-pending "kill gays" bill. Her exact words:

“The fact they are re-criminalizing homosexuality is (a) their business, (b) it is patronizing for white Westerners to be telling these folks — they are seeing George Soros funded gay groups going into Uganda. They are all through the schools, lots of promotion to kids. Poor kids, poor kids are being offered money and favors and gifts to have sex. That’s exploitation. That’s sex trafficking. And it’s being done mostly homosexually. By Western homosexuals coming in and trying to get involved in Uganda.”

That sure sounds like "advocating killing" to ME.
Labels: hate groups, Linda Harvey, Mission America, Truth Wins Out, Uganda, Wayne Besen
reposted from Joe
Posted by oreydc at 10:52 PM No comments: Links to this post

Via JMG: Rosie: Media To Blame For Bullying

Rosie O'Donnell appeared on Thomas Roberts' MSNBC show this afternoon to plug her new show and talk about bullying, which she says is fueled, in part, by cable news. "Some of the 24-hour news networks seemed to take pride in the fact that they bully people."

Labels: bullying, LGBT youth, Rosie O'Donnell
posted by Joe
Posted by oreydc at 10:44 PM No comments: Links to this post 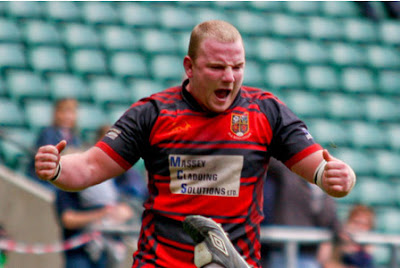 Wales has another out pro athlete.

Old Redcliffians captain Jed Hooper has become the first Combination player to publicly announce that he is gay. The 22-year-old back row forward came out to family and friends earlier this year. And Hooper has now spoken exclusively to the Evening Post in the hope that his story can help other young rugby players come to terms with their sexuality. In recent seasons, former Welsh international Gareth Thomas and top referee Nigel Owens have both broken one of the great taboos in arguably the most macho sport of all. And Hooper, a fierce competitor who speaks as directly off the pitch as he does in his pre-match team talks, has now also chosen to come out of the closet after years of anxiety connected to grappling with his true identity. The decision, he said, was still far from easy. "I met someone earlier this year who said he could not be with someone who was in the closet. That, basically, was the catalyst that I needed."

Hit the link for the rest of a great story. (Tipped by JMG reader Leif)
Labels: coming out, rugby, UK, Wales
reposted from Joe
Posted by oreydc at 10:43 PM No comments: Links to this post

"I believe that homosexuality is -- that it is unnatural activity. Unnatural and immoral. I realize individuals are maybe born -- nature or nurture, I don't know what it is -- I assume nobody actually gets to be 13 or 14 and suddenly chooses this. But I do think -- and people may not be able to control their orientation -- but I do believe as a Catholic that people can control their conduct. And that is where I think, I would say, that kind of conduct should be discouraged in a good society, in a healthy society. And it used to be discouraged. And I do think that the idea that men can marry men and women marry women in the USA is a sign of a civilization in its final throes. I mean, we saw things like this at the end of the Weimar Republic. Things like this at the end of the Roman Empire. And they are attendant to a declining nation and a declining civilization." - Pat Buchanan, speaking to NPR.

RELATED: The Human Rights Campaign and Media Matters have called for disciplinary action from MSNBC and its parent company NBC Universal. Via press release:

Every credible major medical and mental health organization in the United States has stated that homosexuality is normal, and attempts to alter or oppress a person’s sexual orientation can be dangerous and damaging. “While Pat Buchanan is free to hold and express his views, that fact that MSNBC has given him a public platform to spew this sort of dangerous rhetoric is unacceptable, “said HRC President Joe Solmonese. “MSNBC should sanction Mr. Buchanan, as his extremist ideas are incredibly harmful to millions of LGBT people around the world.” During his tenure as a political commentator for MSNBC, Buchanan has made a number of bigoted, racist, and anti-Semitic comments for which he has been reprimanded.

Labels: assholery, HRC, MSNBC, Pat Buchanan
reposted from Joe
Posted by oreydc at 10:29 PM No comments: Links to this post

Posted by oreydc at 10:37 AM No comments: Links to this post

We must grow weary of craving

– Upasika Kee Nanayon, "A Glob of Tar"
Read the entire article in the Tricycle Wisdom Collection
Posted by oreydc at 7:12 AM No comments: Links to this post

Via AmericaBloggay:"It Gets Better" is not enough. It’s time to arrest some bullies

I agree with Dan Savage on this one.  Kids are dying. It's time to get tough with bullies.  It's also, I might add, time for our elected leaders in Washington to take this issue seriously. Why is neither of the two proposed anti-bullying bills included in a massive education reform bill that just passed out of a key Senate committee?  That committee, and the entire Senate, is controlled by Democrats.  They chose to leave our legislation out of the bill.  Why?  Was including "the gay" too embarrassing for Senate Democrats?  And why didn't any of our groups have enough leverage to get the legislation included?
This is the reason we elect Democrats. Not just to do the high profile stuff like get DADT repealed, but to keep our interests in mind when they work on every piece of legislation.  And it seems, more often than not, that they shove our interests aside as quickly and quietly as possible.  This appears to be another shining example of, as Joe calls it, "political homophobia."  And I'm getting really tired of it.
Posted by oreydc at 7:08 AM No comments: Links to this post

Via AMERICAblogGay:NOM used Obama rally photo and pretended it was one of their rallies

I've been in San Francisco attending a Netroots Nation board meeting the past few days, so missed this incredible catch from Jeremy Hooper.  NOM, the lead anti-gay group on marriage took a photo of an Obama rally and pretended that it was a photo of one of its rallies.  Simply amazing.

Posted by oreydc at 7:07 AM No comments: Links to this post