The issues of whether a federal judge was correct in overturning California's Proposition 8 marriage ban and whether he was fit to decide the case despite being gay will be decided by the U.S. Court of Appeals for the Ninth Circuit. Combining the decisions could streamline the case for a potential hearing by the U.S. Supreme Court. In June, a federal court rejected an attempt by marriage rights opponents to vacate Judge Vaughn Walker's decision to throw out Proposition 8. Metro Weekly (Washington, D.C.)/Poliglot
Posted by oreydc at 6:12 PM No comments: Links to this post

More good news in the world of sports.

Major League Baseball, which saw Jackie Robinson break the color barrier in 1947, today will announce incremental progress in another civil rights issue. The new Collective Bargaining Agreement adds “sexual orientation” to its section on discrimination, a person with direct knowledge of the agreement told the Daily News. Article XV, Section A of the MLB’s expiring Basic Agreement, in effect from 2006-2011, states: “The provisions of this Agreement shall be applied to all Players covered by this Agreement without regard to race, color, religion or national origin.” In the new agreement, which will be made public this afternoon, the words “sexual orientation” will be added to the equivalent section.

RELATED: You may recall that the San Francisco Giants, upon the urging of local activist Sean Chapin, became the first pro sports team to create an "It Gets Better" video. Several other pro baseball teams have since followed suit. I don't think it's far-fetched to give Chapin some credit for today's news.
Labels: baseball, employment, Sean Chapin, sports
reposted from Joe
Posted by oreydc at 4:50 PM No comments: Links to this post

Via JMG: NORTH CAROLINA: Baptist Church Votes "No Marriages Until Gays Can Marry Too" 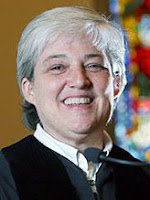 With the backing of their openly lesbian pastor, a Baptist church in Raleigh, North Carolina has voted to prohibit her from signing marriage certificates until gay couples can marry too.

The congregants said in a formal statement that current North Carolina law - and the language proposed for a vote next year on an amendment to the state Constitution - discriminates against same-sex couples "by denying them the rights and privileges enjoyed by heterosexual married couples." "As people of faith, affirming the Christian teaching that before God all people are equal, we will no longer participate in this discrimination," the church's statement says. The vote was unanimous and brought tears to the eyes of some of the 100 or so members who stood to vote in favor of the "statement on marriage ceremonies."

Labels: marriage equality, North Carolina, religion
reposted from Joe
Posted by oreydc at 8:21 AM No comments: Links to this post

The 56-year-old Rajoy has previously said he believes the law is unconstitutional and that he would “change” it even if the nation's highest court ruled it constitutional.

“I will listen to the court, but I don't like the fact that there is gay marriage and I don't think it is constitutional,” he told daily El Pais. “What I don't like is the word 'marriage.'”

Posted by oreydc at 7:30 AM No comments: Links to this post

Posted by oreydc at 7:28 AM No comments: Links to this post


You Lack Nothing // Você Falta Nada


– Elihu Genmyo Smith, "No Need to Do Zazen, Therefore Must Do Zazen"
Read the entire article in the Tricycle Wisdom Collection
Posted by oreydc at 6:17 AM 1 comment: Links to this post