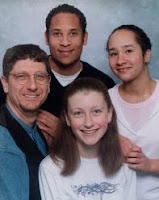 The openly gay adopted son of infamous anti-abortion activist Randall Terry has been killed in a Georgia car accident. When Jamiel Terry first came out five years ago, his father publicly denounced him with cruel scriptural references about eternal damnation and a life doomed to an early and gruesome end from AIDS. Today the senior Terry issued a press release via Christian Newswire. An excerpt:


In 2006, Jamiel Terry made national headlines with his announcement that he was a practicing homosexual, and began to promote homosexual marriage. Randall Terry has long been engaged in high profile political efforts to defeat the attempt to legalize homosexual marriage. The rift between Jamiel and Randall Terry was widely exploited and at times misrepresented in print and on TV. However, Randall and Jamiel maintained frequent contact, and were "working through their issues." [snip] Randall Terry: "We beg you for your prayers for our family, and beg you to pray for the mercy of God, and the eternal rest of Jamiel's soul. He will be sorely missed. We still cannot believe this is happening. God have mercy; Christ have mercy."

In lieu of flowers, the above-linked press release asks for donations for Jamiel's headstone. That's a typically shameless move, since Randall Terry obviously has the money to purchase gruesome anti-abortion billboards all over the nation.

UPDATE: Over at Good As You, Jeremy Hooper reminds us of Randall Terry's first response to his son's coming out announcement.

If I love my son, I can't say to him, "Hey, you're committing suicide on the installment plan. This is a great lifestyle." I have to be honest with him. Take out the word homosexuality and put in alcoholism or put in drug addiction. Would you tell a drug addict, "I accept you. This is your choice, this is your life and I will stand by you"? The average death age of a male homosexual is 42 years old because of disease, because of suicide, because of alcoholism, because of drugs, because of violence. It's just not a good world. It's a self-abusive, self-destructive sexual addiction.

Labels: abortion, hate groups, obituary
reposted from Joe
Posted by oreydc at 5:07 PM No comments: Links to this post

Posted by oreydc at 4:56 PM No comments: Links to this post

Via JMG: Photo Of The Day 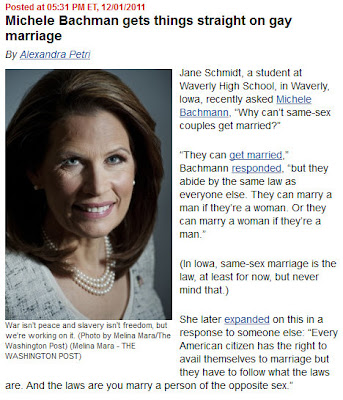 AmericaBlog tips us to today's hilarious shot of Crazy Eyes in the Washington Post. Could this be even better/worse than her infamous Newsweek shot? Get ready for the wingnuts to attack WaPo for "purposely selecting an unflattering photo."
Labels: Michele Bachmann, photo of the day, WaPo
reposted from Joe
Posted by oreydc at 4:50 PM No comments: Links to this post

Binational couples and the holidays
From the BiNationalCouples blog:
My lovely friend in Colorado will celebrate Christmas with her wife via Skype. Her wife is British and lives in the UK. In spite of her wife's extensive education, there is no "line" at the immigration office for this bi-national couple to get into.
My very dear friend lives in California, her wife, her legal wife (married in Canada and in California) will be in England due to the United States immigration discriminatory laws. These two ladies pose no threat to anyone, as a matter of fact, the Californian is a Military Veteran. In spite of serving her country, her country refuses to acknowledge her marriage to her lovely wife from the United Kingdom. They, too, will spend Christmas apart....touching their computer screens instead of holding each other.


VIDEO made by the US Citizen
Follow Up Story:  Heartbreak for Lesbian Binational Couple: What's Changed in a Year
I have a friend on twitter who is struggling on telling her son (age 2) and daughter (age 6), that their "other" Mom's visa may not be renewed. Another family separated by the so called Defense of Marriage Act and immigration discrimination. Will they be able to watch their children open their presents....together as a family?
Their Story:  Part 1         Their Story:  Part 2
Things that heterosexuals take for granted, spending holiday's with the family, watching the kids open presents, sitting around the dinner table, are things that bi-national same sex couples pray to be a reality soon.
Posted by oreydc at 7:51 AM No comments: Links to this post

- Marilyn Buck, "The Freedom to Breathe"
Read the entire article in the Tricycle Wisdom Collection
Posted by oreydc at 7:38 AM No comments: Links to this post